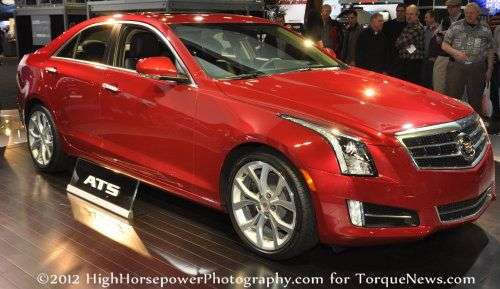 General Motors announced today that the 2013 Cadillac ATS Turbo fitted with the turbocharged 2.0L 4-cylinder engine and the standard 6-speed automatic transmission offer 21 miles per gallon in the city and an impressive number of 31mpg on the open road.
Advertisement

Since it was announced that the 2013 Cadillac ATS sport sedan would feature three engine options including the naturally aspirated 2.5L, the turbocharged 2.0L and the naturally aspirated 3.6L V6 – many have speculated that it could be the most exciting to drive and these fuel economy figures show that there isn’t much compromise in terms of fuel economy. The 2.0T in the ATS packs 272 horsepower and 260lb-ft of torque which allows the new compact Caddy sedan to rocket from 0 to 60 in just 5.7 seconds but with 21 miles per gallon around town and 31 on the highway, those buyers who opt for the 2.0L mill over the standard 2.5L engine do not have to suffer at the gas pump. The 2.5L engine offers 22mpg in town and 33 on the highway so ATS Turbo buyers lose just 1 and 2mpg respectively but the 2.5L engine carries a substantial disadvantage in power with just 202hp.

The 2013 Cadillac ATS Turbo starts at $35,795 (rear wheel drive, automatic transmission) which is $1,805 more than the entry level model with the 2.5L engine. That averages out to just around $26 per horsepower when a buyer opts for the 2.0L model over the 2.5L powered sedans.

The top of the line models for the 2013 Cadillac ATS are powered by the 3.6L V6, which packs 321 horsepower and 274lb-ft of torque but fuel economy of this larger engine drops to 19 in the city and 28 around town with rear wheel drive; 18mpg city and 26 highway with all wheel drive. The 3.6L models offer a fairly substantial advantage in power over the 2.0T but the minimal torque difference should help to even the performance battle between the two. Most importantly to some is the fact that the 3.6L models start at $42,090 which is $6,295 more than the base ATS Turbo sedan. That amounts to $129 per horsepower between the Turbo and 3.6L V6 models and while the differences between the two are vastly more than just an engine swap, the 2.0T might be the model preferred by go fast junkies – especially considering that the V6 is not available with a manual transmission.

While General Motors would have liked to see the 2013 Cadillac ATS Turbo offering EPA fuel economy figures a little closer to the 22/33 achieved by the 2013 BMW 328i but the ATS trades a little fuel economy for a whole lot more power as the 328 offers only 240 horsepower. The good news is that the 2013 ATS Turbo offers better fuel economy than other top compact luxury sedans including the Audi A4, the Lexus IS250, the Mercedes Benz C-Class and the Volvo S60 while also offering more power than any 4-cylinder engine option in the class. Oh, the ATS Turbo is also less expensive than the 4-cylinder powered Lexus, Mercedes Benz, and BMW.

Fuel economy figures for the 2013 Cadillac ATS Turbo fitted with the optional 6-speed manual transmission have not been announced yet but those models equipped with the 2.0T, the automatic transmission and optional all wheel drive can expect to see 20 miles per gallon around town and 30 on the highway.