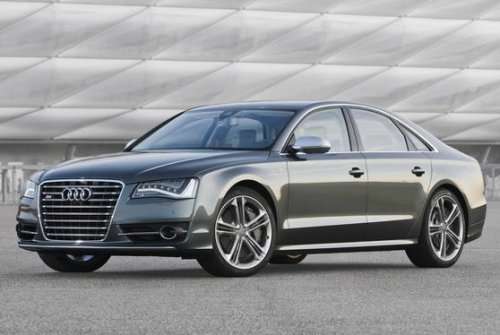 Audi has just dropped the details on the 2013 Audi A8 and the newest full sized luxury sedan will ditch the naturally aspirated 4.2L V8 in favor of a 4.0L twin turbocharged engine that provides more power and better fuel economy than the outgoing V8 option while also adding a new supercharged V6 that serves as the entry level powerplant.
Advertisement

The 2012 Audi A8 is only available with the 4.2L naturally aspirated V8 (short wheel or long wheel base) and the 6.3L W12 (long wheel base only) but for 2013, there will be three variants of the A8 in addition to the performance minded S8 sedan. The entry level engine for the 2013 Audi A8 is the 3.0L supercharged V6, followed by the 4.0L twin turbocharged V8 and capped off by the unique, range topping W12.

The 3.0L supercharged V6 offered in the 2013 Audi A8 has made a great name for itself in the likes of the Audi S5, packing 333 horsepower and 325lb-ft of torque and helping the brawny A8 dash from 0-60 in just 5.5 seconds en route to hitting a top speed of 130 miles per hour. The 3.0L supercharged 2013 A8 is able to turn out the same performance figures whether it is the normal wheelbase or the long wheelbase model while also hitting 18 miles per gallon around town and 28 on the open road. More importantly, the 2013 A8 models powered by the 3.0L supercharged model comes with the same level of interior appointments as the outgoing 4.2L V8 models.

Next in line is the brand spanking new twin turbocharged 4.0L V8 in the 2013 Audi A8 and S8 – packing 420 horsepower and 406lb-ft of torque in the A8 while offering an impressive 520 horsepower in the new S8 sport sedan (shown on the right). The output of this new boosted engine helps the S8 dash from 0-60 in an incredibly low 3.9 seconds with the help of an 8-speed Tiptronic automatic transmission. There have been no fuel economy figures offered thus far for the new twin turbo V8 but this smaller V8 featuring forced induction and a cylinder deactivation system that turns this high performance V8 into a fuel sipping 4-cylinder engine when cruising on the highway should offer improved fuel economy compared to the 18 city and 28 highway offered by the 4.2L 2012 Audi A8. The 2013 Audi A8 with the 4.0L twin turbo motor is available with either the normal wheelbase or long wheelbase while the 2013 Audi S8 is available only with the normal wheelbase. For comparison, the 4.2L V8 in 2012 offered 372 horsepower and 328lb-ft, bringing about gains of 48 horsepower and 78lb-ft of torque with the new engine.

The top of the line 2013 Audi A8 is still powered by the unique W12 engine, packing 500 horsepower and 463lb-ft of torque, reaching 14mpg around town and 21 on the highway and moving out from 0-60 in just 4.4 seconds. The A8 W12 package is only available on the long wheelbase model…making that 4.4 second 0-60 time even more impressive considering just how huge the A8L is compared to other (slower) sport sedans on the market.