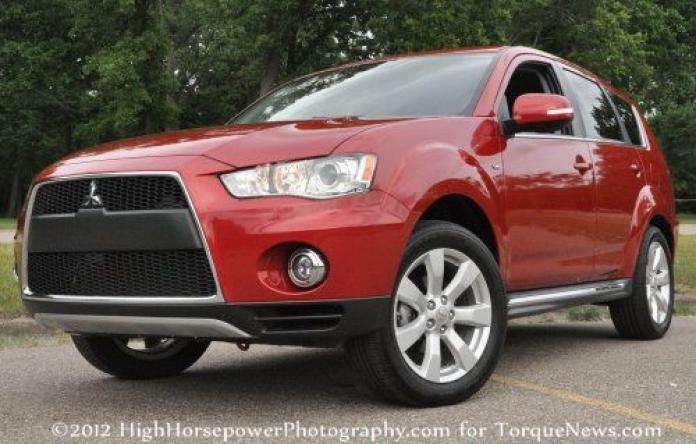 The diminutive Mitsubishi lineup offers two sport utility vehicles that share the same name and recently, I had a chance to spend a week behind the wheel of the roomy 2012 Mitsubishi Outlander GT S-AWC - the larger of the two company SUVs packing seating for seven and realistic fuel economy of 25mpg on the open road.
Advertisement

My 2012 Mitsubishi Outlander GT S-AWC test vehicle was equipped with the 3.0L V6 engine and a 6 speed Sportronic automatic transmission mated to Mitsubishi’s Super All Wheel Control (S-AWC) system. The GT trimline of the Outlander is the top of the line option and with my test vehicle being equipped with both the Touring Package and the Navigation with Rearview Camera Package, there is little that can be wanted inside and out.

The Exterior of The 2012 Mitsubishi Outlander GT S-AWC
The 2012 Mitsubishi Outlander GT S-AWC shares similar front end styling to that found on the smaller Sport model that shares the Outlander name; although the full sized Outlander has a slightly bolder design to fit the larger lines. Across the front end, the Outlander has the familiar grille treatment that is common among the Mitsubishi lineup with angular, angry looking headlights mounted just outside of the grille area and pointing inward. Unlike the Sport that has a body colored center bar running across the grille, the Outlander GT uses a matte black center bar that smoothly connects the upper and lower grille openings. That matte black look is echoed along the bottom of the front fascia while the front end is accented with silver on the lower fascia, around the fog lights and trimming the grille. The front end is as aggressive as you would expect from the modern Mitsubishi lineup, presenting a sporty look but the touch of chrome here and there gives it a more upscale feel.

Along the side, the 2012 Mitsubishi Outlander GT S-AWC has a more upright feel than the smaller Outlander Sport with a flatter, longer roofline that affords everyone inside gobs of headroom. The accentuated wheel openings with rounded edges give the Outlander a muscular feel while a chrome strip running along the lower edge of the side glass angles upward to create a “fast” look. The B and C pillars are both finished in matte black which blends in with the darkened glass to add to the sporty feel that is punctuated by the lower chrome trim strip running along the back most glass up towards the roof. Body colored side mirrors and door handles give the vehicle a seamless look while the black and chrome lower side sill follow suit with the front end, adding attitude and class.

Out back, the 2012 Mitsubishi Outlander GT S-AWC has a massive rear window that is tinted dark enough to make it look almost solid from the outside while still proving tons of visibility out the back window for the driver. Above that dark rear glass is a low profile spoiler that improves the look and aero properties of the roomy sport ute while the dark lower fascia area has an upward angle that fits with the angular design of the rest of the vehicle.

One of the most distinct styling features of the 2012 Outlander is the large LED taillights which do not use a red lens design so when the lights are not illuminated; they appear to be grey and clear. However, when the brakes are applied, the many LEDs mounted in the upper grey panel light up bright red – all of which creates a great looking lighting design.

The 2012 Mitsubishi Outlander GT S-AWC is a 7 passenger vehicle that doesn’t look that big from the outside but the long, high roofline offers a sleek look and tons of interior space. Where other 7 passenger SUVs look big and bulky, the Outlander GT has a design that makes it look like a smaller SUV so for those people who don’t want to drive a “big vehicle” but they still want a roomy vehicle – the Outlander delivers.

The Interior
The 2012 Mitsubishi Outlander GT S-AWC is a 7 passenger vehicle with tons of room for the front and second row of seating. While there is a third row that conveniently tucks into the rear cargo space floor that offers seating for two extra bodies, those bodies are going to have to be fairly small. The third row is ideal for kids as the short distance from the third row seats to the floor caters more to someone with shorter legs. However, the driver and front passenger seat along with the entire second row offers plenty of space for 6 foot tall adults. I can safely say that the Outlander will comfortably seat 6 children and an adult driver so for a mom or dad carpooling to kindergarten, this would be an idea vehicle. However, I wasn’t doing any carpooling so with my wife and son in the vehicle, there was no need for the third row of seats.

The beautiful part of the Outlander’s rear seating is that it folds into the floor in such a way that it doesn’t get in the way of rear cargo space. When the back seat is folded down, you cannot even tell that it is there and in this large rear cargo area, the Outlander really differentiates itself from the smaller Outlander Sport. The tall rear roofline offers both a high ceiling for cargo along with a massive rear door opening so not only can you put a great deal of cargo in the back – you can put very large single objects. Also, if you need even more space the second row of seats will fold forward to make for a cargo area as big as your average half ton pickup with just the pull of a couple loops mounted in the back of the rear seats.

In terms of interior amenities, the 2012 Mitsubishi Outlander GT S-AWC is just about as loaded as it gets when fitted with the Touring Package and the Navigation with Rearview Camera Package. The Touring Package adds leather seating surfaces for the front and second row, heated front seats, a power driver’s seat, a power sunroof and a rear camera system that works in conjunction with the navigation screen. The Navigation Package adds a large touchscreen that controls the navigation and sound system with a 40gb hard drive to store your favorite music. Speaking of music, those audiophiles who love a good heart-pumping sound system will love the Rockford Fosgate Punch premium sound system that pounds 710 watts through 9 speakers and a 10” subwoofer. In short…this system Booms. In addition to the touchscreen, the driver can also control the infotainment system via the steering wheel controls or the simple buttons mounted around the outer edge of the touchscreen. The HVAC system is controlled by means of three large knobs mounted in the center stack below the infotainment screen.

The Drive
My 2012 Mitsubishi Outlander GT S-AWC was fitted with the top of the line 3.0L V6 packing 230 horsepower and 215lb-ft of torque mated to a 6-speed automatic Sportronic transmission that offered manual control by either the shift lever on the center console or by using the fantastic Mitsubishi steering wheel mounted paddle shifters. A great many companies offer paddle shifters right now but as they come – the system used in the Outlander (and Outlander Sport) is among my favorite setup. Massive aluminum paddles run almost the length of the steering wheel on both sides, giving the driver quick access to shift gears during stints of spirited driving. The paddle shifting may not improve performance but it definitely adds some “fun to drive” factor to both of the Mitsubishi SUVs. The available power is funneled to all four wheels via the Super All Wheel Control (S-AWC) which Mitsubishi claims is one of the most advanced and most capable all wheel drive systems available in the US. Unfortunately, I had the Outlander in the middle of the summer so I was only able to test the roomy Mitsu SUV on paved dry roads but even in the urban jungle – the Outlander performed very well.

One of the key advantages of the 2012 Mitsubishi Outlander GT S-AWC compared to the other vehicles in the class is the fuel economy and with ratings of 19 miles per gallon around town, 25 on the highway and a combined figure of 21mpg, the Outlander is one of the more fuel efficient V6 models in the class. On top of that excellent EPA rating, I was able to achieve about 26 miles per gallon on an all-highway trip and on that tank of gas (which also had some driving around town), I was able to average almost 23mpg. During the course of a normal mix between city and highway driving, my Outlander got between 21 and 22mpg.

With “only” 230 horsepower and 215lb-ft of torque driving all four wheels, the 2012 Outlander GT S-AWC is a little lighter on power than some of the other SUVs in the class but the 3.0L V6 does very well for itself. You aren’t going to win a great many drag races but the available power is enough to get the Outlander out into traffic with no problems and when cruising on the open road, a couple bumps of the left paddle and a rev of the engine will help the Outlander climb well over the century mark. Also, for an SUV that will seat 7 passengers, the Outlander handles surprisingly well in tight quarters while being surprisingly smooth on the open road. Mind you, this is an SUV so it has the ride of a sport utility vehicle but Mitsubishi does a nice job of balancing the stiffness needed to make the Outlander so capable with a solid, smooth ride that wont rattle your teeth loose.

The Final Word
The 2012 Mitsubishi Outlander GT S-AWC offers impressive fuel economy for a vehicle of its size at a discount compared to similarly equipped SUVs in the class – all with a price in the low 30k range. The price of the Outlander puts it about even with the entry level Dodge Durango but that price brings you a fully loaded SUV with a big bright touch screen, advanced all wheel drive and leather seating surfaces. The Outlander has a solid amount of power for daily driving with enough gusto to get you from point A to point B with some urgency, all along providing a smooth, comfortable ride for everyone inside.

If you are in the market for a roomy SUV that will seat 7 (provided that two are either very short adults or children), the 2012 Mitsubishi Outlander GT S-AWC is a go-anywhere SUV that offers great fuel economy and lots of amenities for a very low price.