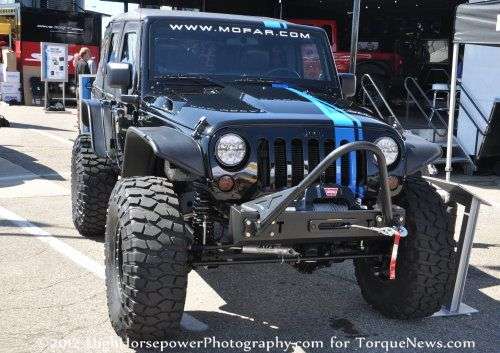 This past weekend at the 2012 Woodward Dream Cruise, the massive Chrysler Group display at 13 Miles Road and Woodward Ave had an area with the customized Mopar vehicles sporting their model year alongside the 2012 Jeep Wrangler Apache by Mopar which shares the black and blue paint scheme – leaving some to wonder if this could be a hint as to the future of the Mopar vehicle lineup.
Advertisement

Chrysler’s Mopar division is best known for their supply of OEM replacement parts and high performance components ranging from cold air intakes to crate engines but beginning in 2012, the Mopar division began offering their own limited edition, customized versions of company products. At first there was the Mopar 10 based on the Dodge Challenger followed by the Charger based Mopar 11 and the Chrysler 300C based Mopar 12. After the Challenger was featured in 2010, many expected that the Charger would be the Mopar 11 – and it was. However, prior to the debut of the Mopar 12 based on the Chrysler 300C there was a great deal of speculation as to what vehicle the Mopar 12 would use for its basis with some wondering if it would be a Ram, a Fiat 500, or a Jeep with that speculation put to rest when the Mopar 12 was unveiled.

Now that the Chrysler Group has used all three of the vehicles that use the similar chassis, Mopar enthusiasts are left to question what company vehicle could be used for a Mopar 13. Discussions point out the obvious interests in Mopar-tuned versions of the Ram 1500, the Dodge Durango, the Jeep Grand Cherokee and the new Fiat 500 but what if the Mopar division has already offered a hint as to what is coming next?

Among the many featured vehicles at the 2012 Woodward Dream Cruise was the 2012 Jeep Wrangler Apache by Mopar which was originally unveiled earlier this year at the Jeep Moab Easter Safari. This ultra high performance off roading machine was parked along with the Mopar 10, Mopar 11 and Mopar 12 – all of which wear an almost identical paint scheme featuring black paint with a blue offset “driver’s stripe”. This is the same paint scheme worn by the Wrangler Apache by Mopar and while we can’t expect that the Mopar 13 will be an SRT-duty 6.4L Hemi-powered Jeep Wrangler, you have to wonder if this black and blue Jeep is a suggestion that the next Mopar vehicle will be an off road performance vehicle rather than a street brawler.

In addition to showing off the advantages of light tuning to the Dodge Challenger, Dodge Charger and Chrysler 300C, the Mopar 10, 11 and 12 allow the Mopar division to show off how these three vehicles can be modified using dealership-offered components. While the Mopar-branded performance vehicles are offered in limited edition, the items that improve the performance and appearance of these vehicles are available on a piece by piece basis via the Mopar Performance catalogs. That Mopar Performance catalog has far more to it than just on road go-fast goodies and with plenty of emphasis on items to make company vehicles more off road friendly – it would make perfect sense for the Mopar 13 to be a Jeep product.

Like the Mopar 10, 11, and 12, a Jeep-based Mopar 13 would likely sport the same black and blue appearance package that would also extend into the interior of the vehicle. The Mopar cars have included slight suspension upgrades which could appear as a lift kit for the Jeep in question along with a set of unique wheels, a cold air intake package and maybe a freer flowing exhaust system. A Jeep Wrangler powered by the 3.6L Pentastar V6, fitted with some minor performance adders like a cold air intake and exhaust system along with some hefty tires, rims and suspension goodies could certainly show that the Mopar name is more than just on road performance.

Of course, this is all just speculation and there is no guarantee that there will be a Mopar 13 but with the popularity of the other Mopar branded vehicles and the depth of offerings from the Mopar aftermarket performance division – it would not come as a huge surprise to see a Mopar 13 that takes a very different direction than the first three models.

Check out the gallery on the right by clicking any of the thumbnails for a closer look at the current Mopar vehicle lineup.