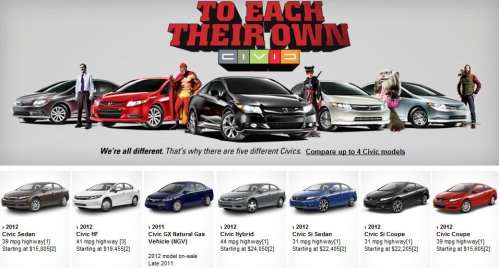 The 2012 Honda Civic configurator is live

The 2012 Honda Civic has received some minor upgrades from the 2011 models and if you have been waiting for your chance to price out a new Civic sedan or coupe, the time has come with the introduction of the 2012 Civic configurator on Honda’s website.
Advertisement

The 2012 Civic currently dominates the Honda automobile website with a spread of 5 new Civics with the slogan “We’re all different. That’s why there are five different Civics. To each their own.” To show the possible diversity of Civic owners, each of these 5 new Hondas has a unique character with the car (shown above). The Civic Sedan gets a businessman, the Civic Coupe gets what looks to be a Mexican Luchador, the Civic Si gets a lady ninja, the Civic HF gets some sort of monster accessorized in pink and the Civic Hybrid gets a lumberjack. I understand where they are going with the lumberjack driving the Civic Hybrid as a woodsy-type would want to help the environment but lumberjacks spend quite a bit of time driving on unpaved roads which wouldn’t be so friendly to the car. Anyways…

Once you enter the Civic-specific page, To Each Their Own sprawls across the top of the same image of the 5 Civics and characters. Honda boasts of 5 different 2012 Civic models but when you count the Si Sedan and Coupe separately and consider the upcoming Civic GX Natural Gas Vehicle (late 2011 availability) there are actually 7 models. On top of that, depending on which model you pick, there are a variety of available trimlines with the 2012 Civic Sedan offering 6 different packages ranging from DX to EX-L with navigation. On the other hand, the 2012 Civic Hybrid is only offered in a basic trimline with packages for leather, navigation or both.

The least expensive model for the 2012 Honda Civic is the Coupe DX with a base price of $15,605, which includes the 140-hp, 1.8L 4-cylinder engine and a manual gearbox. Opting for the automatic transmission will bump up the price an additional $800. The 2012 Civic Coupe tops out with the EX-L model equipped with their elaborate navigation system, which carries a price of $23,455. The 2012 Honda Civic Sedan is the next least expensive model with a starting price of $15,805 and the 4-door model shares the same trimlines, features and price variations as the 2012 Coupe. Both the 2012 Civic Coupe and Sedan offer 39mpg based on EPA ratings.

The next step up the ladder is the 2012 Honda Civic HF which boasts a fuel economy rating of 41mpg and a starting price of $19,455. This special fuel-friendly package features lightweight rims, low rolling resistance tires and some aerodynamic tweaks to offer hybrid-like economy without the higher prices associated with hybrid vehicles. This package offers no additional trimline choice but it does include a standard 5-speed automatic transmission tuned specially for the HF package.

The next most expensive option for the 2012 Honda Civic is the high performance Si trimline – offered as both a Coupe and Sedan – with a 201hp, 2.4L 4-cylinder engine mated to a manual transmission. The Si Coupe carries a price of $22,205 and the Sedan starts at $22,405 with options like the summer performance tires tacking on an additional $200. Like the Civic HF, the Si models do not have the letter designations but they do offer leather and navigation packages.

The current top of the line is the 2012 Honda Civic Hybrid, which offers 44mpg and starts with a price of $24,050. This package includes a continuously variable transmission (CVT) mated to a 1.5L 4-cylinder engine with a hybrid assist system powered by a lithium ion battery pack and the only options are a leather package, a navigation package or a pairing of the two.

The final option for the 2012 Honda Civic is the Civic GX Natural Gas Vehicle which will not be available until later in the 2011 calendar year. This unique vehicle runs on compressed natural gas with a 113hp 1.8L 4-cylinder engine, offering almost no tailpipe emissions and while EPA fuel economy ratings and price will be announced closer to the release date, Honda points out that this green option grants drivers HOV (high occupancy vehicle) access in many US areas.

Click here to visit the 2012 Honda Civic website and check out the gallery below for a closer look at the 2012 Civic.

Tesla Contemplates A New Strategy for China Retail even As Sales Boom
Jay Leno on Elon Musk & EVs: “I Think He Should Get ... Credit"
END_OF_DOCUMENT_TOKEN_TO_BE_REPLACED