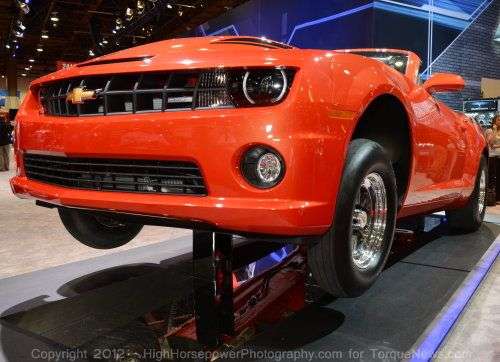 General Motors used the 2012 SEMA Show to unveil the final 2012 model year COPO Camaro drag car which happens to be the first convertible model while also announcing that the company will be building 69 more examples of this factory drag racing package for the 2013 model year.
Advertisement

When General Motors announced that they would be producing the COPO Camaro for the 2012 model year following a very successful debut of the COPO Camaro Concept at the 2011 SEMA Show, the automaker planned to build 69 examples of this race ready (and non street legal) factory package. This number was picked to commemorate the 1969 model year in which the very first COPO Camaro was sold and as the 2012 model year production run for the Camaro came to an end at the company’s Oshawa Ontario plant - it came time for GM to built COPO Camaro #69. While every COPO Camaro is special in its own right, GM wanted to make the final COPO model for 2012 extra special so they opted to build this factory race car as a convertible rather than relying on the coupe format used for 67 of the first 68 examples. COPO Camaro #68 is also a convertible but that race car has been earmarked not to be offered for public consumption as GM plans to save that for their own historical collection.

2012 COPO Camaro #69 is powered by the 327 cubic inch V8 engine option fitted with the 4.0L Whipple supercharger so not only is this the most unique COPO Camaro - it is also one of the most powerful in stock form with only 20 of the COPO cars being sold with this configuration. This engine sends 550 horsepower (per NHRA rules) to the rear wheels via a GM 3-speed Turbo 400 automatic transmission (the only COPO Camaro with this transmission) with a solid rear axle helping to make the most of all of that power which is enough to rocket this topless Camaro down the quarter mile in the 8 second range.

Adding to the exclusivity of 2012 COPO Camaro #69 is the striking Inferno Metallic paint which is unique to this particular race car along with the special COPO #69 striping package shown in the gallery on the right (click any thumbnail for a closer look). For those wondering, the metallic orange COPO Camaro Convertible does come with a fully functional motorized convertible top which is required for entry in NHRA stock and super stock convertible classes as - unfortunately - anyone who takes this car down the quarter mile at a sanctioned event with have to do so with the top in the upright and locked position.

The 2012 COPO Camaro Convertible will likely hit a few auto shows and other events around the country before heading to the Barrett Jackson Auto Auction in January with the proceeds going to benefit the American Heart Association.

"The COPO Camaro program has been a special program and there's not a better way to close out the 2012 racing season than with the final – and most unique – one of the production run," said Jim Campbell, GM U.S. vice president of Performance Vehicles and Motorsports. "Chevrolet is proud to once again partner with the American Heart Association at Barrett-Jackson for the sale of this COPO Camaro convertible. It will make a great race car or collector vehicle for a lucky bidder, who will be buying a piece of history.”

More COPO Camaro race cars coming in 2013
General Motors has received a great deal of interest in the new COPO Camaro racing package so to help satisfy those who want to race in the stock drag racing classes, the company has announced that they will built 69 more examples of the COPO Camaro for the 2013 model year. The company has not said how many coupes and convertibles will be built (although we would speculate that there will be vastly more hardtops than soft tops) but with more than 3,000 prospective buyers interested in being a part of the COPO Camaro race program - it still isn’t going to be easy for racers to get their hands on a factory drag racing package in 2013.

"I am also happy to announce that due to strong customer demand we will produce another run of 69 COPO Camaros for 2013. More than 3,000 hand-raisers expressed interest in buying a COPO after we introduced the car at SEMA last year. We are excited to support these grassroots motorsports enthusiasts in their Stock Eliminator and Super Stock drag racing efforts," said Campbell.

Luckily, in addition to the 69 examples of the 2013 COPO Camaro, GM has also announced that they will be offering “body in white” Camaros along with all of the components to allow race car builders to complete their own COPO Camaro - although it will not technically be a factory COPO Camaro so it will not have the same future collectors value. However, that wont make those Camaro race cars any slower in the quarter mile so for those GM racers who want to run the NHRA stock and super stock classes - they can build their own race ready Camaro via the new COPO Camaro build book. This book walks car builders through the steps of acquiring the components needed to build a proper, NHRA approved Camaro race car right down to the three different high horsepower engine options.

-32 2012 COPO Camaros were painted Summit White (including the original concept car), 20 were black, 12 were Victory Red, 2 were Ashen Grey Metallic, 2 were Silver Ice Metallic and 1 was Inferno Orange Metallic.

-12 COPO Camaros sold in 2012 were ordered without any of the factory COPO graphics.

shehterpol wrote on November 2, 2012 - 8:29am Permalink
Rotor Root Engine2 - two combustion chamber RRE2 Power per 1 kg weight of the engine " power density" - 110 kwt/kg. None of the crankshaft, pistons, valves, camshaft. Absence of friction only rolling friction No lubrication system, clutch, gearbox. Uses compressed air, gasoline, diesel fuel, bio-fuel and gas. Working in water and underwater conditions with no atmosphere. I have developed a design of RRE2, and centrifugal compressor for air and gases. a complete set of drawings. I am looking for partners for prototyping, testing and implementation.