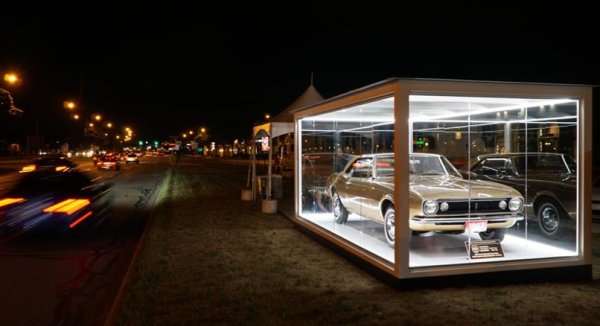 Those folks visiting the Metro Detroit area this weekend for the 2016 Woodward Dream Cruise will be able to check out the very first every Chevrolet Camaro, which is on display in a big, lighted glass box alongside Woodward Avenue as part of the Historic Vehicle Association program.
Advertisement

The Chevrolet Camaro is the key focus of the Woodward Dream Cruise for General Motors, as the automaker celebrates their popular pony car’s 50th birthday. The Camaro festivities begin tomorrow at the Lansing Grand River plant, followed by a special ‘Camaros and Coffee’ event in the parking lot of Joe Louis Arena on Friday and, of course, the Camaro will be the star of the Chevy display at Saturday’s Woodward Dream Cruise.

In addition to checking out whatever Chevrolet brings out to celebrate, the Historic Vehicle Association will have a Camaro of their own on display in the form of the very first 1967 Camaro built – which will be located near the official Chevy display at the Woodward Dream Cruise in a huge, illuminated glass box.

“This first Chevrolet Camaro launched one of the greatest rivalries in automotive history with the Ford Mustang,” said Mark Gessler, President of the HVA. “That rivalry is still alive and well fifty years later and we are here at the Woodward Dream Cruise with a public exhibition to celebrate where it all began.”

1967 Chevrolet Camaro #1
The 1967 Chevrolet Camaro on display with the Historic Vehicle Association is owned by 18 year old Logan Lawson of Hutchinson, Kansas, who found the car during an online search when he was in 7th grade. Logan’s father inspected the car and helped his son make the purchase of the 1967 Camaro with VIN 123377N100001 – with 100001 signifying that this was the very first production example of the Chevrolet Camaro. Once Logan and his dad had the Camaro, they began the 5-year restoration process during which time the Camaro was transformed from a custom built drag car to its original form.

This first 1967 Chevrolet Camaro was painted gold and fitted with the 140 horsepower,230 cubic inch inline 6-cylinder engine when it rolled off of the Norwood, Ohio assembly line on May 21st, 1966. This Camaro was one of the first 52 cars built during the pilot production period and one of the 49 which were built at the Norwood plant. Original options included seat belts, wheel covers and whitewall tires and before those options were added, this Camaro would have had an MSRP of $2,466.

As part of the Historic Vehicle Association program, Logan’s 1967 Camaro has been placed in an illuminated glass box along Woodward Avenue, at the intersection of Old Woodward and New Woodward in Birmingham. Starting tonight (Wednesday, August 17th) at 8:30pm, the Camaro’s box will be brightly lit until midnight, so those folks who drive past this historic muscle car will be able to see it at almost any time of day. Of course, checking out the first Camaro will be free of charge, since it is just hanging out alongside the famous Detroit area street.