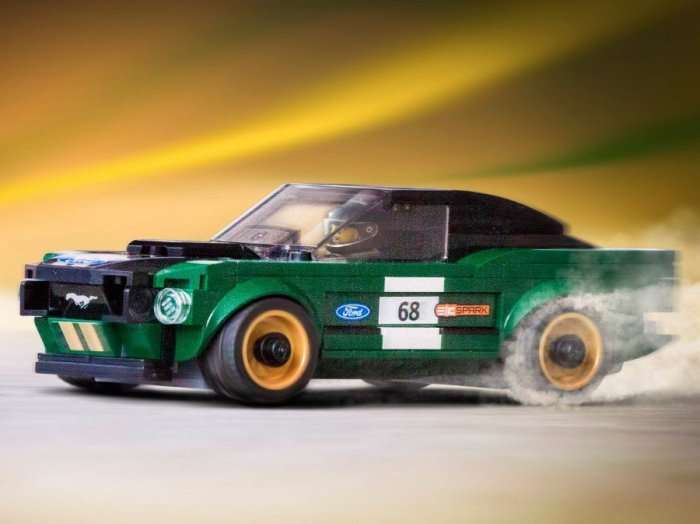 The 1968 Ford Mustang Races into the World of Lego

Ford Motor Company has announced that the 1968 Mustang fastback will soon be available in Lego form, joining several other Ford performance vehicles in the Lego Speed Champions lineup.
Advertisement

The Ford Mustang is arguably the most famous American automobile of all time. Since being introduced in the spring of 1964, the mighty Mustang has become a staple of the American performance car world and vintage models have become prized collectables around the world. One of the most popular years for the classic Mustang is 1968, making these cars hard to find and very expensive in the current market.

Thanks to the Lego brand of built-it-yourself toys, you will soon be able to buy a small scale 1968 Ford Mustang for just $14.99, giving Mustang fans young and old a chance to park the historic pony car on their desk or bookshelf.

“The new Ford Mustang LEGO Speed Champions set gives parents and children the chance to share their passions – generations of fans have grown up building LEGO sets and spending time together behind the wheel,” said Myra Lind, LEGO Speed Champions marketing manager. “This partnership of iconic brands allows kids of all ages to enjoy the latest products from two great companies.”

1968 Ford Mustang by Lego
The newest toy version of the 1968 Ford Mustang comes to us from Lego, as part of the brand’s Speed Champions collection. When all 183 pieces of the kit are assembled, this 1st generation fastback pony car is finished in dark green with black trim, gold stripes and gold wheels. While the car doesn’t share the exact lines of the 1968 Mustang due to the shape of the Lego bricks, there is no question that the fastback above is clearly a classic Mustang.

“We worked closely with LEGO to design a vintage Mustang, personalizing the fastback with stripes and decals that harken back to Ford’s racing heritage,” said Matt Monroe, Ford licensing manager. “This 1968 Mustang fastback race car is a special product that adds even more excitement to Ford’s LEGO Speed Champions lineup.”

In addition to the 1968 Ford Mustang, this kit includes a driver in a vintage racing suit and a Ford-branded timing board, with an MSRP for the whole package of just $14.99.

For Ford fans and Lego lovers, the 1968 Mustang is a must-have, and while we don’t know where you will be able to buy one locally, they should be pretty easy to find in online stores and websites like eBay.