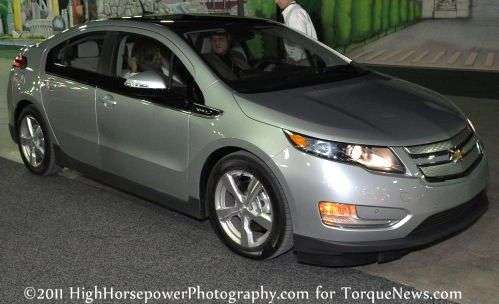 What consumers say about not buying Chevy Volt, GM listens

Yet, apparently there are some serious hurdle that prevent people from buying more Chevrolet Volt models. Some of them are subjective others are objective. What is encouraging is that GM is very serious about learning what they are since the company has asked its followers on Facebook, it's a sign that GM wants to address them in the coming weeks and months.

The reason is the survey by Trend Tracker which found that people are not considering an all-electric vehicle for their next purchase. A year or so ago many people wanted electric cars to lower the amount of money the spent on gasoline. Now the society kind of got cozy with the existing average gas prices and its members' priorities have changed, the Trend Tracker survey shows. "With interviews taking place face-to-face in their homes 42% of those surveyed said they want to choose a car that lowers their personal emissions. Sixteen percent agreed strongly with this proposition, while 25% neither agreed nor disagreed, 14% disagreed, and 3% disagreed strongly," the survey shows.

Thus, who or what killed electric cars?

Chevy's desire to want to know why people are not considering electric cars for their next vehicle purchase is commendable. The company spent many millions and has committed thousands of workers to developing Chevy Volt and we all need to find out the objective and subjective reasons of EVs' marketing failure.

Here are some interesting comments from Chevy Volt's Facebook followers.

"People are conditioned now to a tolerance of paying $3-4.00 a gallon. The shock of $60 at the pump is gone. If gas jumped to $5.00/gallon, Volts would move like crazy," writes Larry Bisagni. Dance Jacobs brings up the issues of battery power, replenishing time and the cargo. "Volt is a good idea, when the price comes down a little it will more viable for more people. The Leaf is a joke, it gets about the same efficiency as gasoline and the hundred mile range is a joke too. It depends in your speed, temperature, cargo. You are lucky to get 60 miles out of a charge. Whatever nanotech will change things eventually."

Other responders bring up the cost of the car, the ratio of the cost of pumping gas vs replenishing battery and the time of replenishing it. "Battery power isn't as fast to replenish as gasoline... why don't they use solar ponels to charge the battery or something similar to help.. also, electric bills increase more so than gasoline costs," writes Robert Mitchell.

Yet others believe that the scarcity of charging stations and the range is an important factors. One things the marketing of electric cars will be more successful if the gas is 5 dollars per gallon. Another one says it takes less time to fill up a gas tank than replenishing the battery. Another question is what if the batter needs to be replaced in 5 years or so? Consumers seem to want at least 300 mile range on electricity in case they need to travel.

Overall it seems that many people are not well aware of the pros and cons of electric cars or Chevy Volt. Some say it will take up to 5 years to break even, others say it may take up to 8 years to break even on electric vs regular car purchase. One reader said if the companies can make the initial price under 20,000 dollars they can't make enough of it.

Society-wide change to electric or solar cars will be a huge and unprecedented effort. Perhaps a new way of thinking can help to lower the price of the Chevy Volt or other electric cars and the companies could still make some money by using the concept of price elasticity.

Frank Sherosky wrote on October 4, 2011 - 10:58pm Permalink
GM marketing people have forgotten what it's like to be human and a working human at that. Many of them get lease cars for free if they are corporate and 8th level. No wonder they still cannot relate! The bottom line IS the bottom line. $$$$ Those Volts are too expensive. I would like to buy one, but look at the lease rate: $350-$400 depending on the deal, and that's with incentives. Even as a retiree I can buy a Cruze for a lot less and have money left over for gasoline and a dinner or two every month. I say get the lease rate below $300 per month and the cars will fly out of the showroom.
Armen Hareyan wrote on October 5, 2011 - 7:29am Permalink
Agree with you Frank. The electric car technology is still nascent and in order for it to succeed there has got be some type of automaker-consumer partnership to bring down the cost, if the range is still going to be the same. And they need to be made in such a way so when more advanced batteries emerge in few years, today's buyers can easily, or FREELY upgrade their batteries. GM needs more Volt buyers and Nissan needs more Leaf buyers, but these buyers must be made sure so that when the technology advances in few years, they are not left behind. The humanity is now so advanced. Look what we did with the cost of cell pones. It should be possible to think anew and bring down the price of Chevy Volt or Nissan Leaf.
Soapy Johnson wrote on October 5, 2011 - 10:33am Permalink
Sales failed to rebound and demand has been non-existent since February's Chevrolet Volt 400 ...
BCB wrote on November 1, 2011 - 12:53pm Permalink
Not true...in the markets they are available, there are LOTS of wait lists. Been waiting 8 weeks for mine so far... Getting it because it will change the price of my current commute from $7.00/day in gas (2 gallons) to $1.25/day in electric/gas. AND I get to eliminate the expensive repair bills I have every 6 months. GM should have marketed this under the cadillac name, though. It really is a luxury-level performance (but the insides are less so). That said, with the tax credits and gas savings, mine should more than pay for itself before the battery warranty is up (@ 8 yrs).
John Paul wrote on October 5, 2011 - 12:10pm Permalink
What are the comments why some don't need to buy Chevy cars?
Frank Sherosky wrote on October 5, 2011 - 12:28pm Permalink
With all respect, I do not see this article as against Chevy at all (if that's what you mean). It merely brings up the critical point that people need to be able to afford them; and the Chevy Volt is a case in point, as is the the Nissan Leaf. Fact is, the Chevy Cruze is more affordable overall. A Volt still costs $350 plus per month whether you drive it or not; which is not the case if I leave a Cruze in the garage and the monthly lease is far less than $250 per month.