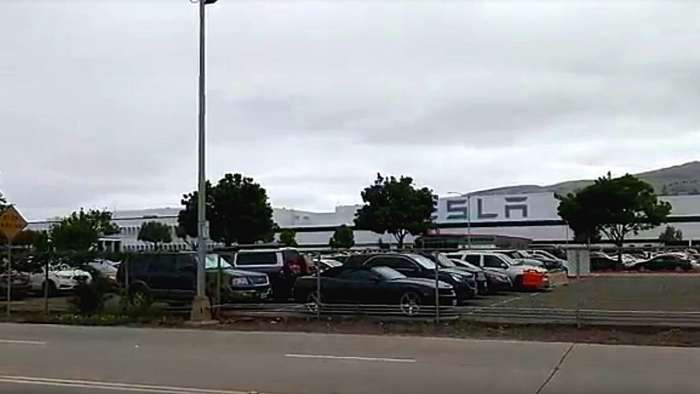 There was no official word from Tesla about its attitude of the face-saving deal that Alameda County sent to Tesla regarding the factory opening, but the video of the Fremont plant's parking lot Wednesday gives an idea that Tesla and Elon Musk comply and accept the reopening deal.
Advertisement

Tesla's Fremont parking lot was full on Monday as the electric car maker reopened its main plant in Fremont, CA defying the orders of the Alameda County Health Department. There were lots of employee cars as well as hundreds of new cars in the new-car parking lot, from where Tesla ships its newly-made Model 3, Model Y and other EVs.

Monday evening Alameda Health Department reiterated its stance against Tesla to stop production and after some communications with the EV maker's leadership offered Tesla a deal. Here is that deal.

But we didn't know if Tesla accepted it since there was no official announcement neither from Elon Musk nor Tesla. However, today, one of Torque News Youtube friends sent us an exclusive video from Tesla's Fremont parking lot, which clearly shows that Tesla accepted Alameda County's reopening timeline.

Our friend Tim, who took this video looked at the four entrances of Tesla's Fremont parking lot and observed the following.

He says the employee parking lot was nearly full. He even saw their shuttle but running. But when he looked at the new-car parking lot, it seemed empty. Tim says only a few dozen cars were in the parking lot, compared to hundreds of new Tesla cars he saw on Monday.

What does this mean?

To me, it seems that Tesla wants a peaceful solution too, and has quietly agreed Alameda's deal. Alameda allowed Tesla to "begin to augment their Minimum Business Operations this week in preparation for possible reopening as soon as next week."

I think Tesla is augmenting its operations by making car parts only. This is why last Monday we saw hundreds of new Tesla cars ready to be shipped to Tesla's car buyers, while today there were only a dozen or so.

As a result, no one can blame Tesla for not complying with the county's health department and Tesla can prepare for full opening next Monday while augmenting its parts production.

I am glad Elon Musk and the Alameda Health Department agreed on this deal, which allows both parties to save face under public pressure. Hopefully next week all car factories in the United States will reopen their factories and people will get back to work. Elon presented himself as a reasonable corporate leader. I hope California will manage to keep Tesla in the state, which is better both for its economy and employment. But Texas Governor Greg Abbott yesterday said Elon Musk "is genuinely interested in Texas and genuinely frustrated with California." After talking to each other, they are going to "wait and see how things play out" regarding Tesla's potential move from California to Texas.