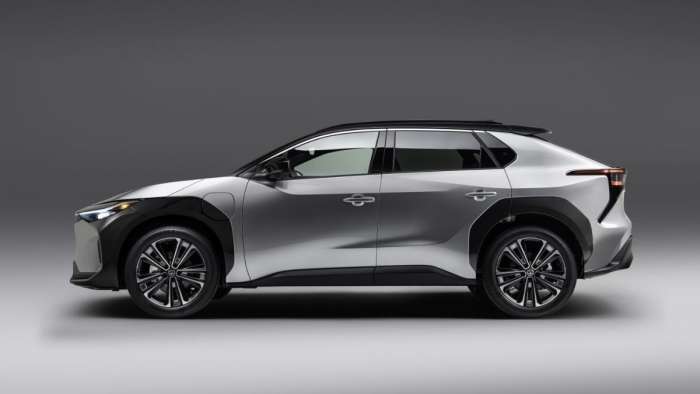 Toyota unveils additional information on its first fully electric vehicle, the bZ4X. This SUV is a pioneer within Toyota and its genetics are shared with the Subaru Solterra.
Advertisement

After years of defending the virtues of hybrid vehicles, Toyota seems to finally make the leap into fully electric models. It all comes to fruition this week with the global announcement of the production version of the Toyota bZ4X, a model that will initially be marketed in Japan. This is the first all-electric model in a long line according to Toyota.

The vehicle is based on Toyota's dedicated battery electric vehicle platform. Called eTNGA, this platform was unveiled in conjunction with Subaru which, for its part, will use it as the basis for the Subaru Soltera, its first electric vehicle. To situate you, the vehicle will fit into the compact SUV segment; its dimensions are similar to the Toyota RAV4, it is just a little smaller.

According to the first published data, the bZ4X will offer a 71.4 kilowatt-hour battery placed on the floor to lower the vehicle's center of gravity and promote better weight distribution between the front and the rear. Even if the manufacturer has not officially published the values, it envisages a range of 280 miles of range (450 kilometers according to WLTP standards), so a little less according to our EPA standards. The manufacturer also mentions having added a heat pump in order to reduce the loss of autonomy linked to the heating of the passenger compartment. 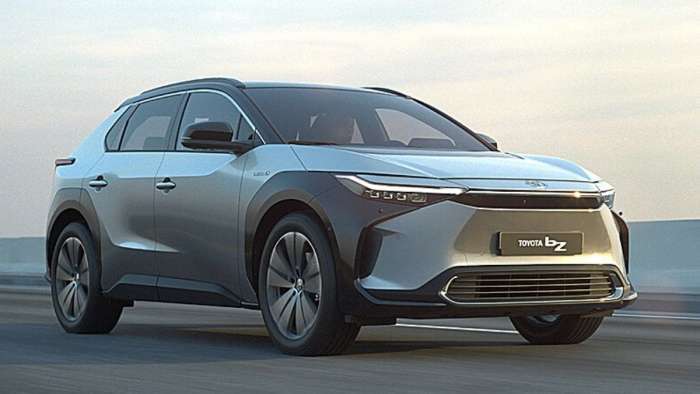 Two versions will be offered: front-wheel-drive and all-wheel-drive. The first will have a 150-kilowatt electric motor developing 201 horsepower and producing 195 pound-feet of torque. According to Toyota, the 0 to 60 acceleration would be crossed in just 8.4 seconds.

As for the all-wheel-drive version, it will be equipped with a pair of 80-kilowatt electric motors, one positioned at the front, the other at the rear. Combined power will be 215 horsepower for 248 pound-feet of torque, allowing the vehicle to sprint from 0 to 60 miles in just over 7.7 seconds. 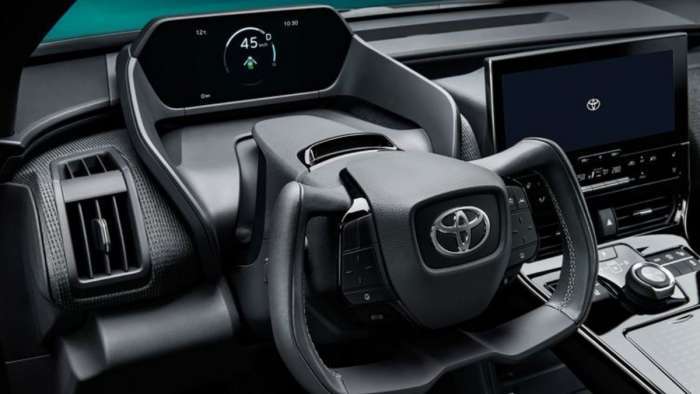 The vehicle will be able to recover 80% of its load in 30 minutes; Toyota will also offer a solar panel to also ensure the recharging of the battery. It will also be equipped with a fully computerized pipe (Steer-by-wire), therefore without any mechanical connection.

The bZ4X is part of Toyota's new “beyond Zero” brand which will include all of the manufacturer's battery-electric vehicles. Toyota plans to introduce seven "bZ" vehicles by 2025.

LG's New EV Battery Plant Is a Welcome News for Tesla
Tesla Giga Berlin's New Hurdle: It's Not Only the Gov't, but Now Tesla Itself
END_OF_DOCUMENT_TOKEN_TO_BE_REPLACED