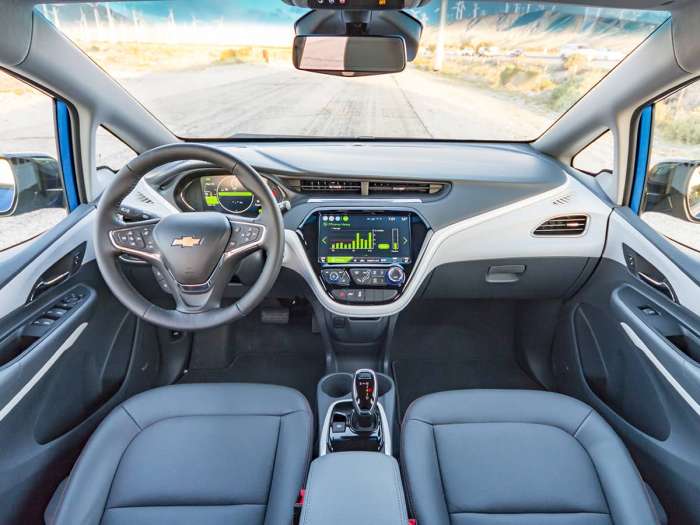 After all, Chevy Bolt seats are not that bad. Bolt owners generally speak positive about them and updated Bolt seats are already here starting the 2018 models.
Advertisement

If you read Chevy Bolt reviews you will probably come across an opinion that the front seats are not so comfortable. In fact, last year in November there was an active discussion on Facebook about the new Bolt owners complaining about the quality of front seats. However, apparently they are not that bad and the more you drive the more you get used to the seats.

Now, there is a new discussion in GM Electric Car Owners group on Facebook where Bolt owners speak positively about the quality of the seats: generally positively. But like we said in the previous story about Bolt seats, referred above, "hey, this is not a Buick." Compare apples to apples and oranges to oranges.

In fact, according to GM Authority the seat quality is going to be resolved in 2019. In fact, they are already improved int the 2018 models. According to the article "GM Authority has spoken with Chevrolet and the brand clarified improvements between 2018 and 2019 Bolt EV models. Updated seats were introduced for the 2018 model year and carry over to the 2019 model."

People write that after owning a Bolt for a little while they don't mind the seats and think they are very comfortable to for them and for their families. No complaints. But if you are a very heavy and very overweight person, any car seat in that segment will feel uncomfortable.

"They are fine, but they do feel really cheap. Very little padding and they are pretty narrow," comments a user named Elizabeth, referring to Chevy Bolt seats in the group discussion.

Some people stuff cushions under a seat and it gives a very good feeling of comfort. "I stuffed some cushions under a seat cover. It helps but they do tend to irritate my sciatica," writes Mark. Others, like Harvey, say they have removed the cushions. "At first we got cushions but after a year or so we finally broke in the seats or they broke us in. We don't drive more than 100 or so miles in one sitting though," he writes."

Try Both Cloth and Leather Versions of Bolt Seats

"I would try out both the cloth and leather versions before you decide. Hated the cloth version (there’s a hard “box” that is in the left bolster that digs into my upper back). The leather version seemed to have more padding and is more tolerable, but is very narrow. I never had an issue with comfort in either of my ‘14 or ‘16 Volts," writes Ivan Jue who has contributed stories to Torque News.

There are also some negative comments justifying the earlier reports that Chevrolet needed to upgrade the Bolt seats.

"I am a small person and find them terrible! My back pain has gone up considerably since I got this car. I think for moderate driving it is fine but i spend 3-4 hours in the car a day. If you have the option for another EV with all else considered I’d seriously think about that," writes a user named Kristina.

"Purchased the volt because the Bolt seats were not as comfortable as the Volt seats. I also prefer an all black dash," writes Donald.

"I m not a fan of them. We've had them modified and augmented with after market cushions so it's a bit better now but not great. I suggest people test drive them extensively," writes Jason."

Yet, keep in mind that Chevy has improved the starting the 2018 Model and it will be carried over to the 2019 models.

Many Seem To Be OK With Bolt Seats

"I wouldn’t say they are horrible. But they could be a bit more comfortable. I do notice they are more comfortable when the car is moving versus standing still (I.e. gridlock traffic). I got stuck in stop and stop traffic once and it really hurt. I could feel the seats digging into my thighs for a few days after," writes Uri.

"Most seem to find them OK, but there is a significant percentage of owners who find them in a range from slightly uncomfortable to the 'seats of torture.' Clearly the seats are the number one complaint of those who have an issue with the car. I have never seen any other modern car have so many complaints about the seats.

It takes some times to get used to them. "It took me the first 5,000 miles to break in the driver seat and get it adjusted correctly. After that the next 16,000 miles were flawless. No middle back pain. Suspension was way to bouncy on slightly unsmooth roads though," comments Randy.

This seat issue is all over the place. Not much of a consensus it seems. But generally they are OK and they are upgraded in the newer models. You have to test-drive the Chevy Bolt and see it for yourself.

James Wolynetz wrote on March 16, 2019 - 9:25pm Permalink
I bought my much anticipated 2019 Bolt and love EVERYTHING about it, but the seats. The are still too narrow and have too little padding on the wings. Wish GM would offer to remediate this issue. I am hoping I will get used to it because it’s a wonderfully engineered vehicle.
Robert Killackey wrote on June 3, 2019 - 1:51pm Permalink
I agree with James. Driver seat so bad it prevented me from buying Bolt. Purchase a off lease Spark EV, seat not perfect but much better than Bolt. To Bad I really wanted the Bolt.
James wrote on June 4, 2019 - 1:24pm Permalink
After owning my 2019 Bolt for three months now, I have gotten used to the seat and it doesn’t bother me at all now. I still absolutely love this car and would strongly encourage everyone to not let the seats stop you from purchasing it. For the record, I am 6’2” 220 and find the interior very comfortable and roomy.
Randy wrote on September 7, 2019 - 8:25pm Permalink
While the interior is indeed roomy, the drivers seat is terrible. I hoped that I would adjust, or the seat would "break-in" but so far no luck. Where my Leafs' seat was pleasant, the Bolt seat is dismal. The side wings are far too narrow and regularly dig into my ribs. Poor design, poor execution. I would suggest anyone considering a Bolt take a lengthy test drive and assess whether their build is slight enough to fit between the wings.
Scott wrote on November 21, 2019 - 9:24am Permalink
I can’t believe that GM has the nerve to put such garbage seats in a $40k car... every time I get in the car, the seat makes a snapping sour like its broken. Mine is a 2019, and if this has been “Resolved” by GM, then I can imagine what the last version was like...
Christine Boles wrote on May 9, 2020 - 11:21pm Permalink
We recently test drove a new 2020 Bolt and the seats were what deterred us, without even having read reviews ahead if time. Too narrow and too hard. I’d even offer to pay extra for better seats!
Bill wrote on August 18, 2020 - 5:15pm Permalink
If I buy a Bolt how hard is it to fit aftermarket seats? Does anybody do this? Don't people buy fancy seats for racing Miatas around parking lots? I assume those are for safety, but don't those companies make a comfy seat for a Bolt? I really want a Bolt, but I must have a perfect seat & bright headlamps.
steven r clayton wrote on September 6, 2020 - 5:43pm Permalink
I bought a used bolt ev (2017 model) with 46K miles on it. The seat is an issue. Previous car was the vw egolf and those seats were pretty bad but I got used to them. With the mileage on my car you would think the seats would be broken in and more comfortable. This is the only thing I don't love about the car. If an improved seat was available, I'd be first in line to buy it. Now, I'm 74, good shape for an old guy 6'4" and 220# so I don't think I am too unusual for my body shape and the seat should feel better.
James Wolynetz wrote on September 7, 2020 - 8:59am Permalink
I’ve now had my Bolt for over one year and the seat no longer bothers me whatsoever; I don’t even give it a second thought anymore and I am 6’2” 212 lbs. I wouldn’t let the seats deter you at all from buying this awesome little car.
Randy Nye wrote on September 7, 2020 - 1:41pm Permalink
I totally agree Mr Clayton. Ive had my Bolt for 2 years and the seat still sucks. If I sit in one exact position (not a natural or particularly comfortable position) the wings dont bite my ribs as bad, but any other body position and the wings are very uncomfortable. It is the motivating factor for me looking for something other than a Bolt going forward.
BRIAN DUGAN wrote on February 9, 2021 - 8:07pm Permalink
I bought a 2017 Bolt I do love the car but the seat thing can i install 2020 seats witch are supposed be more comfortable
Texconsin wrote on September 25, 2021 - 6:20pm Permalink
No; no, they are not.