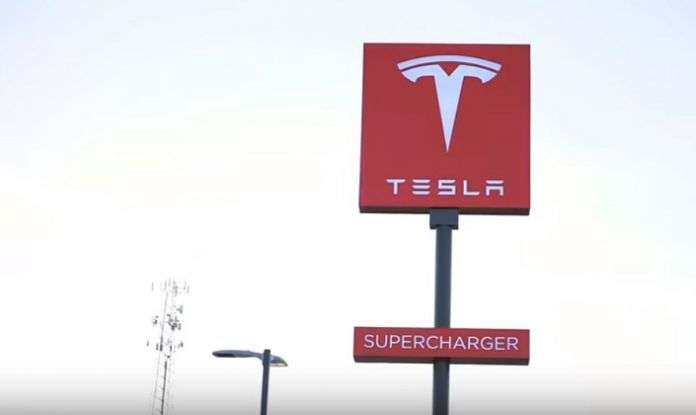 One of the biggest weapons of Tesla is its one of a kind supercharger network. It is exclusive to Tesla owners who are able to fast charge their cars while traveling or simply in need of an extra charge, and most of the time at absolutely no cost to them. Lately, as more and more Tesla vehicles hit the road, some of the more popular supercharger locations have been hit by long lines and therefore long wait times, sometimes totaling in up to 2 hours per one charge.
Advertisement

Recently Tesla has aggressively expanded its supercharger network while adding destination charging locations with slower but still very convenient chargers. A few days ago, pretty much in sync with its Semi Truck unveiling event in Hawthorn, California, Tesla has opened up the largest supercharger location in America, second only to its 50-stall site in China. It is located in Kettleman City, California, about half way between San Francisco and Los Angeles off of highway 5.

But this is not just any other supercharger location. Besides its 40 stalls it hosts the owners lounge, almost like airlines have for their very premier customers. Except this one is for ALL Tesla customers. You need a code to get in, which you have to get from your Tesla navigation system, so only Tesla drivers can enjoy what it has to offer.

The owners lounge consists of three main areas. The first small area is where Tesla’s solar products, like a solar panel and a power wall, are displayed. The main well-lit area has a small café with assortment of drinks, snacks and Tesla merchandise customized for that location. There is an area for kids to play, different types of seating inside and outside the lounge, and very clean bathrooms. It is a bit ironic, though, that bathrooms feature Dyson hand dryers since we know that Dyson is working on a Tesla competitor car. So, essentially by buying those dryers Tesla has contributed, in a very small part, to the development of its own competition. The third area features individually partitioned chairs with more seating around them. You can also find a display to find out some really cool statistics about Tesla’s network around the world.

On top of all this, pun intended, all stalls are covered by a sea of solar panels that are feeding the solar energy into the cars that are charging underneath it.

In about an hour that I have spent at the location, I’ve witness many Tesla owners meeting and mingle with each other while chatting about their cars and the recent news of the new Tesla Semi truck and the second generation Roadster.

Let me know please what you think if you have already been there and seen it. Let's discuss your thoughts on growing supercharger network in the comments section below. What is still missing and what should be improved?

Barbara wrote on November 21, 2017 - 4:30pm Permalink
I like the big Tesla sign. Has anyone, reading this, been there already?
Michael Meyer wrote on November 23, 2017 - 10:55am Permalink
Was there yesterday. Very nice.
kent beuchert wrote on December 1, 2017 - 5:59pm Permalink
Just in time to be rendered obsolete by CCS 350KW chargers ala Porsche Mission e - twice as fast. And with every automaker except Tesla using CCS, Tesla's network will become a joke.