Some logos are burned into our consciousness from an early age. Tesla is relatively a young company, but its logo is already known by hundreds of millions of people in the world if not a billion or more. Today we learned that Tesla raised its red logo on Giga Berlin’s wall. Here is how it happened.
Advertisement

Today our friend Albrecht, who tweets at Gigafactory_4 posted a tweet with new photos from Tesla Giga Berlin. Several photos immediately attracted my attention. Of these photos was Tesla's red logo raised on the wall of Giga Berlin. It looks really nice and stands out on a white wall. However, I don’t know if Tesla’s red logo is on the wall of a temporary building or on the permanent structure. Because this building seems to be a two-story building.

Albrecht also posted a different angle of the Tesla's red logo, which is kind of under the sun's rays ad shines a little bit.

Other two things that stand out in Albrecht's tweet is the picture of a new tent. I don't know why Tesla built this new white tent. It may be for workers, or could be the recent health test center, where they check employee health when they come to work at Giga Berlin. However, if it was for this purpose, I would say that tent would be more closer to the entrance. This once seems to be more centrally located at Giga Berlin.

Albrecht also reports resumption of the groundwork at the new storage hall on the north side. If this is the storage area, which Tesla is going to later turn into the battery factory, that’s very interesting and welcome development. As you know Tesla plans to build the largest battery factory in the world for its electric vehicles. Until recently we didn’t exactly know where that battery factory will be housed: inside the Giga Berlin or outside the premises of Giga Berlin. However, later, we learned that Tesla may use this story area, which is huge, about the size of three soccer fields and then turn it with a new permit application into an EV battery factory. 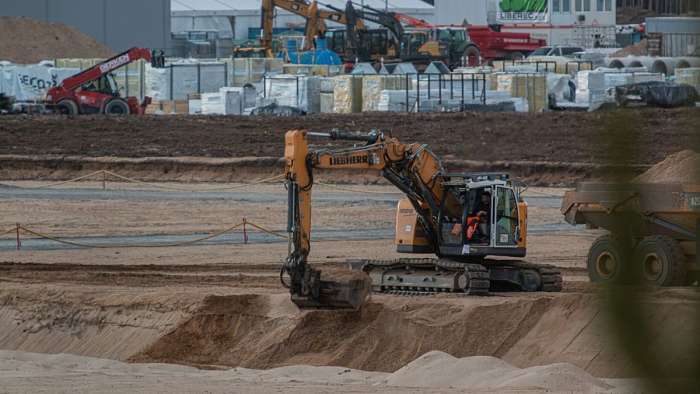 Another notable update from Tesla Giga Berlin was that in the past five days it has mounted Tesla Giga Berlin's new 100 ton crane, which is already assembling the Giga Presser. On a good note, we also learned that the local authorities are working to bring about a solution to Giga Berlin’s water issues related to the expansion of the second and third phases.