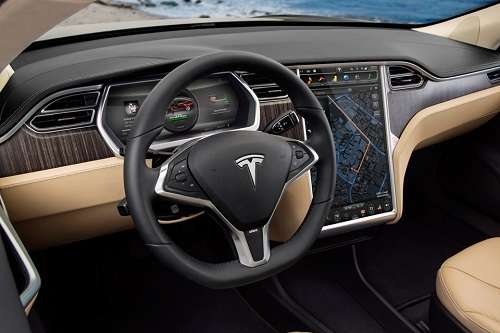 Tesla Model S Air Conditioning Noise: This Is How It Works

During summer because of high temperature many Tesla Model S owners notice and complain about air conditioning noise. See how air conditioning works in Tesla and how it goes away.
Advertisement

When the temperature goes very high some Tesla Model S owners may began to hear a grinding type of sound related to the conditioner. Apparently Tesla considers this air conditioning noise normal and note that number of Tesla owners will tell you it wasn't there originally. The noise becomes louder and more frequent in summer or when you drive under very hot climate conditions.

Air conditioning noise goes down as Model S gets cooler

Some Tesla Model S owners say that they get loud noise after initial "start up" of the car with A/C fan cranking up to 7 or 8+ level. However, after a little while, when the car temperature drops the noise usually subsides. If you turn down the A/C fan to level 3 or 4 you can barely hear the noise.

You may say that your previous Tesla didn't have this. Currently Tesla owners say they think this noise and the way it subsides started after software update 7.0 sometimes in end of 2015 or early 2016.

A/C noise is lout when it's hot

"I have heard this noise too," writes a user 5thumbs in Tesla's Model S Forum. "I hear it when the temperature is hot and the interior of the car is hot (after sitting in the sun). Initially I heard it while supercharging and the AC was on. Turning the AC off, and the sound subsided. Now that it gets above 90 in my car, I have been hearing it more often, but the noise subsides when the temperature drops and the AC can catch up. Once I noticed that if the AC was on and the loud sound was blasting and I was charging at a 30 AMP charger, that the "time till charged" was much greater than if I turned the AC off. Not a small time difference. So whatever that noise is, it was taking a lot of energy. Sounds like a buzz or hum but very very loud," he writes.

Another Reason for The Noise

Tesla Model S A/C noise can be loud because of other reasons too. If you drive you car on gravel roads debris can well get trapped inside driver's front wheel. Then they will interact with the fun for the interior or battery cooling. If this is the case, you may need to take your Model S to the nearby service center for the technicians to look at it.

Does your Tesla have a loud air conditioning noise when your car is hot? If yes, does it subside when the temperature of the interior drops?

danwat1234 wrote on June 22, 2016 - 5:53pm Permalink
I remember hearing about this years ago and it was from the 'tunnel/cave' in the frunk that caused the noise? The new S'es don't have the cave (whether AWD or not, thanks to HEPA filtration (whether you have it or not)). So I guess that was bogus and it was not the cave in the first place. It'll make that noise when the RPM of the inverter compressor is high I assume. Fine by me, I like to stay cool. Unless it is a simple fix like compressor mounts.
Ed Hart wrote on June 23, 2016 - 12:52am Permalink
I have the problem, and it began with the upgrade to 7. With the exception of the compressor noise, the climate control system worked much better. I suspect that the compressor motor drive circuit was changed to pulse width modulation (PWM) from a sinusoidal drive. It may be that my compressor was designed for a sinusoidal drive and is thus noisy with PWM drive. I hope there is a fix someday, because it is really loud...so loud I can easily hear it at 70 mph!
Hart Ed wrote on November 26, 2017 - 7:17pm Permalink
Thought I would let everyone know that Tesla Service changed the compressor on my Model S, and the car is now quieter that when it was new! Yes, I suspect my compressor was defective when installed. The Service Manager said the compressor was tearing itself up internally. The difference I noted when the upgrade to 7 was made may have been that the system was driving the compressor harder. Not sure, but I am extremely happy with the vehicle's acoustics today.
Armen Hareyan wrote on November 26, 2017 - 10:51pm Permalink
Thank you for letting us know Ed. I appreciate it.