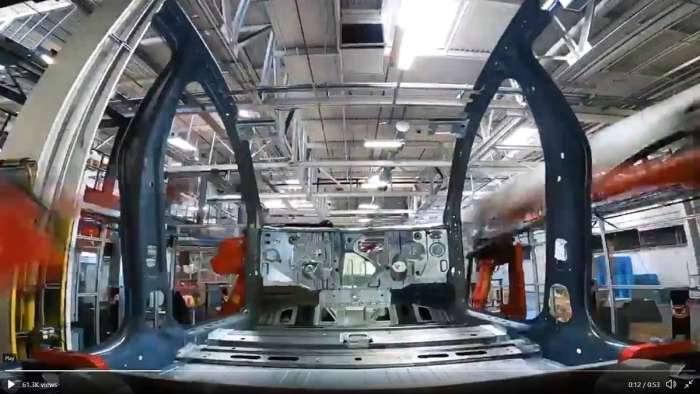 This evening Tesla shared a rare video footage on its Twitter page showing a Model Y making its way through the body shop.
Advertisement

It appears that the Model Y EV was just cast through the Giga Presses and now enters the body shop where about 40-60 robots work on it. You can watch the video here.

“I feel like we are witnessing the birth of a vehicle from the vehicle's perspective. This is cool,” writes Johnna Crider, a Tesla news writer.

I wish they’d show it from beginning to end. I wish Tesla would show the part where humans, with superior tools like their hands, assemble the dash board and the seats and other parts of the interior.

Here is a question to consider: Will Tesla move robots from Fremont to Austin Gigafactory because they are no longer needed with the single casting? Or, does Austin get all new robots? What will Tesla do with all those robots that are going to be replaced by Giga Presses? So far on this question we know that Tesla Gigafactory Texas has received the first parts of the Giga Press machines to be installed on the site. The parts come from IDRA, an Italian company and Tesla's manufacturing partner for the Giga Press.

By the way, did you count the robots in this video? Someone who counted them writes on Twitter, “I counted around 50 to 60 individual robots on that line. That’s a lot of robots.”

So Tesla shared this video of Model Y production on its Twitter account. It’s very cool. I am glad to see Tesla making use of their Twitter account frequently in comparison to past. But like I mentioned above, can we see things like seats, dash boards and other components being installed? Maybe highlight some workers on the factory floor?

Also, you know what’s interesting? It’s neat to think that in a few weeks someone’s going be driving that Model Y EV around, and won’t even know it’s this one.

Tsingshan's Threat to Tesla: EV Maker Is In Battery Crosshairs
Tesla-Funded Research Reveals One of The Biggest Mysteries of EV Battery
END_OF_DOCUMENT_TOKEN_TO_BE_REPLACED