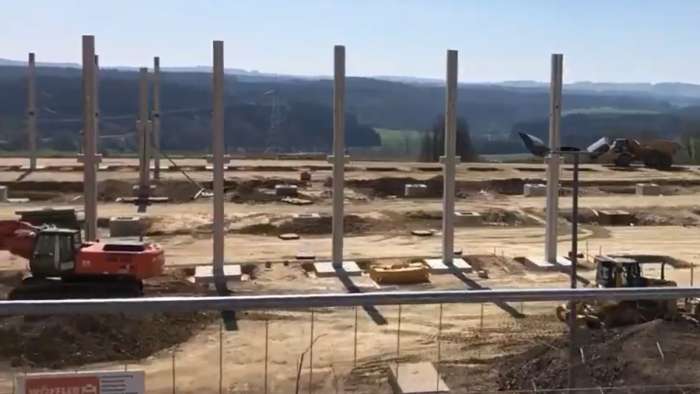 Tesla Is Building a Mini Gigafactory for Its German Automation Subsidiary

Tesla is building something very exciting near the Belgian border, about 430 miles away from Giga Berlin. It's the Grohmann Engineering plant producing battery production automated equipment.
Advertisement

The area is a bit hilly and the construction site is much smaller, but the Belgian Tesla owner @Humpidumpi2 is still right: "The pillars look something like those of Giga Berlin," he wrote on Twitter last weekend. With his Model 3 he had made a trip to the headquarters of the German subsidiary Tesla Automation in the Eifel - and there came across work that, apart from the scope, actually resembles the remarkably early phases of the Gigafactory near Berlin.

Tesla Automation was called Tesla Grohmann Automation until recently and Grohmann Engineering until January 2017 - with the company named after its founder Klaus Grohmann, Tesla bought away a sought-after mechanical engineering service provider from the German auto industry . The head office is still at the founding place Prüm in the Eifel, there are also branches in nearby Neuwied and in Neutraubling in the Upper Palatinate as well as service offices in the USA and China.

The expansion from Germany shows how much the German engineering subsidiary is now integrated into the global Tesla business. Her competencies include machines for battery production at the cell and module level, exactly what Tesla needs more and more . This also applies to Germany as the old Grohmann location and the new one for Tesla with the Gigafactory near Berlin, for which battery cell production is now also to be applied for.

Something very exciting seems to be happening at the Tesla Grohmann Automation site in Prüm, Germany. And #Tesla is using prefabricated materials just like at #GigaBerlin. https://t.co/hla5v7iAf8

"And in fact, casual video observers could confuse the recordings that @Humpidumpi2 made last weekend next to the automation headquarters in Prüm with early pictures of the Gigafactory construction site in Grünheide," notes the article in Teslamag. After the forest was cleared, the earthy surface was leveled for Giga Berlin last summer before hundreds of vertical steel pillars shot out of the ground in square foundations. After all, the construction site next to the existing Tesla building in Prüm now had a good dozen such foundations and pillars.

@Humpidumpi2 could not ask what exactly is growing there like a gigafactory in mini format, because he came across it on a Sunday - on the seventh day of the week Tesla is not even allowed to build in Grünheide. But the fan from Belgium noticed around 25 new charging stations in front of the main building and more on the site in Prüm; even his own supercharger can be seen in a picture of him. He also pointed out that there are currently many new positions advertised at Tesla Automation, especially at the headquarters - the automation subsidiary still has its own job website.