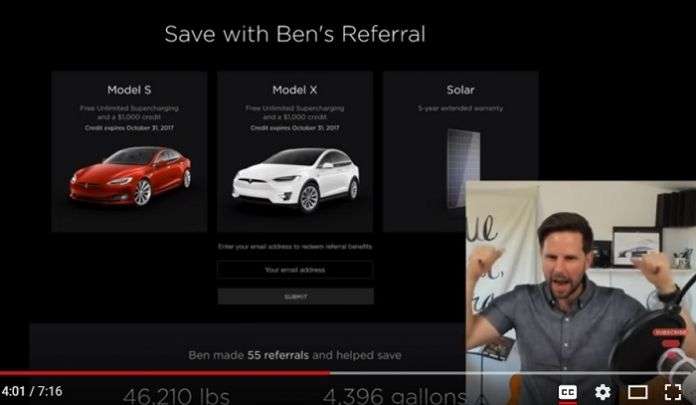 Teslanomics' Ben Sullins logs in to his Tesla account and learns that he just won a a next-gen Tesla Roadster from the company. Watch his reaction in the video below.
Advertisement

Tesla Model S owner Ben Sullins from Teslanomics wins a free next-gen Tesla Roadster for referring more than 50 Model S and X sales in Tesla's Latest Referral program. Here is how he did it. The next-gen Roadster isn't in production yet.

The way Tesla's referral program works is that Tesla has a program for owners like Ben Sullins, to give out a code to people to use that code to buy a Tesla. It seems that it doesn't really happen that often, right? I mean, consider the fact that the average price of a Tesla is around 100,000 dollars and not a lot of people really have that many friends who can afford to buy a Tesla.

But Sullins and his friends do a lot of educational videos on Youtube and Teslanomics about Tesla and people like you watch them and use that code when purchasing a Model S, Model X or Model 3. They use Tslanomics' code whether they want to support them or that's how they found out about Tesla.

The way it works, you sign up to Ben's email list at Teslanomics.co/td and then he sends you the code with a little message about how he got his Tesla and he asks people to let him know once you get your Tesla, Ben explains in this video.

Sullins tells us that the referral program was limited. The way Tesla would do it, each owner would get up to a certain number of people that they could refer each quarter and then you would be able to use that and the referrer would get prizes.

Some of the prizes were like whatever, for example a jacket, or some big things such as a Tesla power wall or a Tesla Model S for kids.

And then it became unlimited (this was actually secret level 2).

Now the deal for them was "if you got 55 referrals, then you would get 100 percent discount on a next-gen Roadster," which hasn't been even designed yet or may be it has preliminarily (the front guy engineers probably have something in the works right now). But you can't go and order the next-gen Tesla Roadster today. The one Sullins will be getting isn't even for sale technically.

The next-gen Tesla Roadaster is likely to be a Founder’s Series or something like that.

Until the secret level 2 was unveiled Sullins was getting 1 to 2 referrals per day. This was barely the end of august. But once they opened up the unlimited secret level two referral program he has referred 46 or more people since then. It went really fast.

And then, you probably already saw in the above video Sullin's reaction when he logs in to Tesla and learns he won a free next-gen Roadster through the referral program. He saved people nearly 55,000 dollars, plus the free supercharging qualifiers, which is about 500 dollars a year.

If you have ever used Tesla's referral program, how was the experience for you? How many have you referred or how much have you saved? Please write about your experience in the comments section and let's discuss it below.

arthur4563 wrote on October 31, 2017 - 3:23pm Permalink
The way Tesla manufactures stuff, I wouldn't hold my breath waiting for the roadster.
Armen Hareyan wrote on November 1, 2017 - 6:30pm Permalink
Well, let's wait and see. Let's see how much time it will take for Tesla to fulfill Model 3 orders. I think the company will focus on the next-gen Roadster only after Model 3 is smoothly processing. How long do you think before the next-gen Roadster is made?