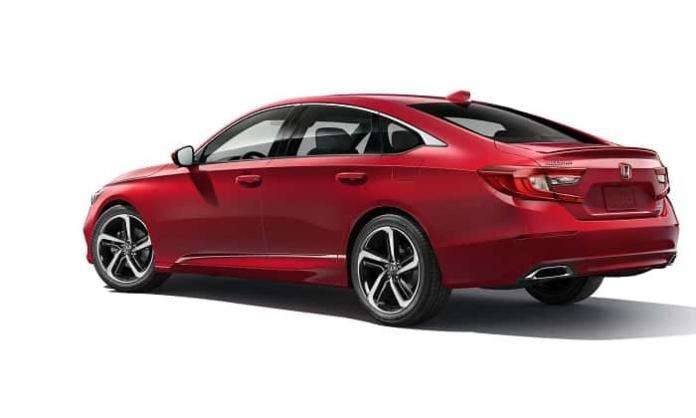 For your contemporary average person, tech devices are not only more interesting than cars, but the only interesting part of cars. If you want entertainment, it’s all there, at your fingertips. Constantly. And so we’re faced with a question: In such a world, where does a time-honored tradition like the Honda Accord find its place?
Advertisement

I grew up in the Age of Accord, the 1990s, back when the model was every person’s answer to “I just need something sensible and reliable, something that drives nice.” Back when reliability and durability were not things the consumer took for granted in a new car, but were sure to be found in every Accord.

Sometime in the early 2000s—let’s say late-2002, when Honda’s 7th generation Accord debuted—the seeds were planted for a new perception of Honda, one that would grow and crystallize in the minds of even some of Honda’s most faithful. This perception was that the company had “lost its way.” And maybe, somewhere along the line, Honda did. Designs became bloated in the years that followed, sometimes in the name of occupant and pedestrian safety, sometimes just for the lols. The driving experience was dulled as engineering advancements further isolated passengers from the road. To be clear, these trends were not only affecting Honda, but car companies the world over. It’s just that while cars like Nissan’s Altima had historically been hit-or-miss affairs (the 90s included), the Accord had always been sort of…great. This made Honda’s purported fall from grace more definable, more poignant. People were saying, “This car was once unquestionably good—and now, it might not be.”

By Fall of 2012, the 8th generation was on its way out. It was an Accord that had, in this writer’s humble opinion, morphed into a big fat mess. And yet it was as reliable as ever, also safer, quieter, roomier than ever. It still had that excellent clutch and gearbox, still had a sweetheart inline-4 at its heart (a K-series, no less, arguably Honda’s finest to date). First year examples of this generation are now ten years old, some with over 200,000 miles on the clock, still ticking along in predictable Honda fashion.

Model year 2013 brought along a new 9th generation, and the car actually got smaller. It looked leaner—and it was, by more than a few pounds. Interior quality, which some felt had fallen out of step during the 8th generation, came back in a big way. Honda kept the manual transmission around, and a Sport model was added. Many regarded this generation as proof of Honda’s interest in returning to some of its old glory, while others maintained that the company as a whole was still lost. (The 2016 Civic would soon lend further credence to the former claim.)

Now, Generation Ten is in view. For 2018, the car gets wider, lower, and a bit shorter in overall length. As always, it adopts particular styling elements that some will detest. Already, forums are awash with murmurs that the front grille is an ugly, gaping void, or the new fastback look is an atrocity, or the taillight design was grotesquely mishandled… We’ve seen it all before, every time an all-new Accord is released. And still, the cars soldier on through the decades, for hundreds of thousands of miles, unmoved.

That’s kind of the point of the Accord. Honda has always tried to engineer a sort of every-driver’s spirit into the car, and has subsequently reached varying levels of success. They’ve continually aimed for quality, and again, success has varied (though in general the car’s been pretty darned solid through the years). As a result of this consistent effort, consumers get an Accord that, for all its growing pains, manages to feel like the same trusty old car, iteration after iteration.

Will we be able to say the same about this new 2018 car, a widest-ever Accord, an Accord that integrates seamlessly (one can hope) with your latest portable supercomputer—an Accord that can, by and large, drive itself? If the last forty-odd years are any indication, probably.

The fact is, the world has changed, and Honda has no choice but to change its legendary model in order to keep up. Remarkably, the engaging clutches, snickety gearboxes and delightful small engines are still to be found, as long as one ticks certain boxes on the option sheet, and omits others. In a move that surprised even some of the most optimistic Honda fans, the company chose to make its manual transmission an option on even the upgraded two-liter turbo motor. In the current midsize family sedan market, this is unheard of. The Accord stands alone.

True, the buttery J-series V6 is no more, and the coupe is also toast. These two moves will certainly alienate some long-time Accord fans. But the times they are a-changin’, and Honda has made some vital decisions that keep the tradition of the Accord alive. For 2018, it will not only remain relevant, but also interesting—even entertaining, in a world where entertainment flows in a constant, endless stream though our devices. It’s nice to know the old nameplate is sticking around, healthy as ever…at least for now.

Renaldo J wrote on September 28, 2017 - 3:12pm Permalink
The best part of this article: " We’ve seen it all before, every time an all-new Accord is released. And still, the cars soldier on through the decades, for hundreds of thousands of miles, unmoved." As many Youtube comments I see complaining about the look of it and comparing it to the 2016 redesign, comments about how the V6 Camry will KILL the Accord, comments about how Mazda has better design - these people on the internet don't represent the people going out and buying the car. All that design language doesn't do Mazda diddly squat when their 100% import sales represent less than 1% of the Market compared to Honda's 9.whatever%. Honda killed the V6 because only 20 people bought it, and in the age of Fuel Efficiency, small displacements with Turbo engines are what manufacturers are turning to in order to hit the "54.5 MPG by 2025" numbers mandated by the government back in 2011. This country is notorious for buying bigger cars and SUVs (I mean, GM DOES control about 19-20% of the market, with the lion'share of that being trucks) when gas prices are low, but as can be seen with the rising prices due to Harvey, myself and millions of other Americans are probably second-guessing skipping on Hybrids as our next purchase.