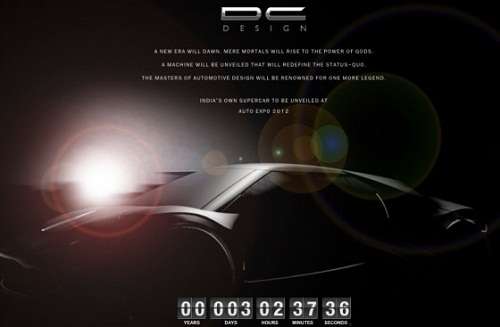 The company's website announces that "a machine will be unveiled that will redefine the status quo." This is how high the hopes and aspirations are raised before the 2012 New Delhi auto show.

The design studio in Mumbai announced that the new car be assertive in style and different in performance, without specifying what is different in high performance. Yet, the company's announcement deserves some credit. DC Design is known of its past surprised and just looking at the gallery of its cars one can see why.

At this point it's hard to get a clear idea of the lines of the future sports car even if some sketches are released, seen in the accompanying image. Some have rumored in the media that the Indian super car will be equipped with a Honda Motor V6 engine. This engine claims 400 horse power. If so, this car will have a beautiful performance perspective. The advertised weight is at only 1560 kg, which is the equivalent of 3440 lb.

even if a little air of the new Stratos is released. We have little information on the model. Some rumored, however, that the Indian will be equipped with a Honda motor home. We speak indeed of a block turbo V6 which claimed about 400 horses. Beautiful performance perspective, since the balance, the weight is advertised at "only" 1,560 kg.

The start of the production of India's first supercar is announced for 2013, according to blog automobile. The company plans to make 300 unites in 2013 only, but hopes to reach to 3000 cars-produced per year by 2015.

These projections work in perspective. However, in the world of supercar production delays are common. The car will be displayed in 2 days, this upcoming weekend.

Facts about the 2012 Auto Expo in New Delhi

Largest Automotive show in India
The only complete Automotive show in World
Only show in India accredited by OICA
Special focus on Green Technologies & Environment
Exclusive Day for media
Repeat of Goodwill day on 5th January 2012
Around 1500 participants from 23 countries
Revised segmentation of display area, with separate dedicated areas for vehicles and components
Visits by buying / sourcing delegations