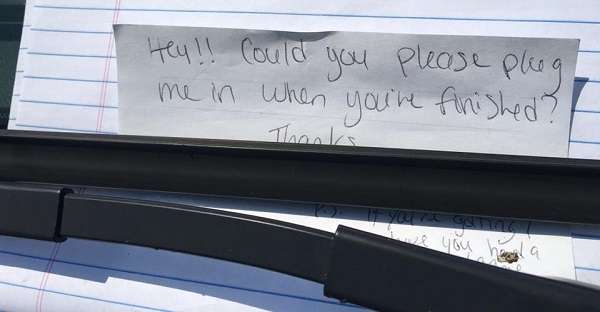 There is a good EV Etiquette being developed among electric car owners helping one another to plugin and charge each others cars in public charging stations and Chevy Volt owners use it.
Advertisement

Imagine two Chevy Volts are parked side by side at a public library and one is plugged in and charging. The charging place is limited. The other Volt's owner can't wait and leaves a nice note on the windshield of the Chevy Volt that is plugged in to the charger.

"Hey! Could you please plug me in when you are finished. Thanks."

While we read and hear about number of cases of charging rage, indeed there is a nice way of doing it. The quoted note was found on two side-by-side Volts at one of the public libraries in California, and shared in EV-HOLE discussion group on Facebook.

"At work we use the 'if the charging flap is open, charge me' system. When other EV owners walk by the EVs in the parking lot during the the day, they will move cords from charged cars to waiting cars," writes Jason Ross in Chevy Volt Owners public group on Facebook. This is another nice way of doing it.

I have heard that some other workplaces have installed a ChargePoint and bills the EV owners' account let's say .25/hr when their EVs are plugged in. Sometimes you can fully charge your Chevy Volt for under a dollar, but some companies set a little higher rate as an "incentive" to unplug your car when finished. The only "downside" of this or similar arrangements is that people who finish charging their electric cars, cannot plug others in if they don't have their ChargePoint cards.

In apartment complexes with limited chargers the situation is little different. Many neighbors support each other all the time. "We have six plug-in cars to three charging stations. Not the best ratio but we make it work," writes Erick. Others even leave a phone number on their windshield to be contacted if needed.

Do you ever leave notes on your car to be plugged in or telling people not to unplug you?

Sal Cameli wrote on June 25, 2016 - 8:09pm Permalink
Hey nice story. Yes. I leave a note behind on my dashboard. I have this thing called an ev-frisbee and it allows me to write on it when I'll be done and my contact info so would be EV owners who may need to charge can SMS text me to find out when I'll be done. :)