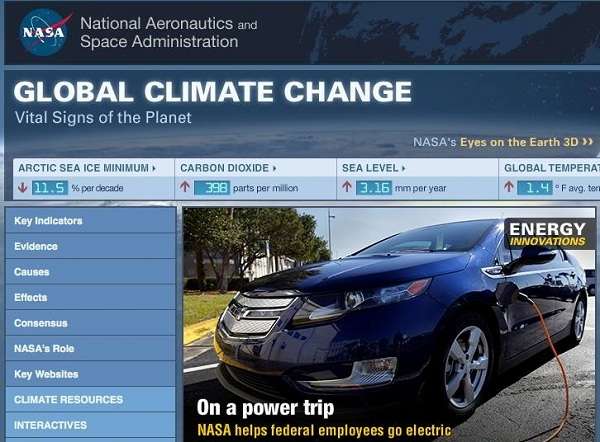 Chevy Volt made it to the NASA Global Climate Change front page participating in a pilot program that investigates potential ways to lower emissions and shows how to save 60,000 pounds of Carbon dioxide with just ten EV drivers.
Advertisement

NASA's new greenhouse gas reduction program shows that with 10 electric car drivers we can have results ten times better than what we thought about the impact of electric vehicles on the environment. Here is what NASA engineers did at Kennedy Space Center.

Preliminary numbers show greater results than what researchers thought. The results are 10 times better, then ever seen before. NASA's goal is to reduce greenhouse gas emissions by 12.3 percent by 2020. Actually, all federal agencies are under presidential order to reduce greenhouse gas emissions. With these results by only using electric cars, NASA hopes to achieve this goal easily because according to Frank Kline from the Kennedy's Sustainability office, the biggest challenge for reducing agency greenhouse gases is the federal employee commutes. EVs, of course, don't produce any greenhouse gases and this is what Kline says the agency wants the employees to stop doing.

The Space Center has ten employees participating in the program. They charge their electric vehicles for free at the center and commute using them. But they also fill out a spreadsheet documenting daily mileage and conditions on the roads daily.

"What we're trying to capture is fully electric plug-ins," Kline said. "The hybrid is not that different from gasoline-powered cars. It's better, but if you go electric, that's really where you see the bang for the buck. Fully electric is where we want to be."

Even if you use EVs only, the greenhouse gas emission reduction is not 100% because of a simple reason. While EVs don't produce emissions, the source that makes the electricity (unless renewable energy source) does produce greenhouse gases (such as a power plant). Nevertheless, the results are amazing and reductions from daily commute dramatic. While average car produces about one pound of carbon dioxide per mile, this experiment has reduced it by 3/5ths.

Kline calls the resulting numbers "insane." The cost of the experiment during the first 3 months was only 148 dollars. With that, plug-in drivers have eliminated over 15,000 pounds of carbon dioxide into the atmosphere. With just ten Electric Car drivers this will amount to 60,000 pounds a year.

Imagine how much they can achieve with 8,000 people who work for the Center. Kline says they can achieve "compelling" results by installing a "modest network of outlets" and that will not be very expensive.This can be easily achieved without having to spend multimillion dollars. Just put some infrastructure in and encourage employees to plug in. The impact on the environment will be truly compelling.

We don't know what types of electric vehicles were involved in the pilot program as NASA's release didn't specify it. However, judging from the accompanying image Chevy Volt was included in the program.