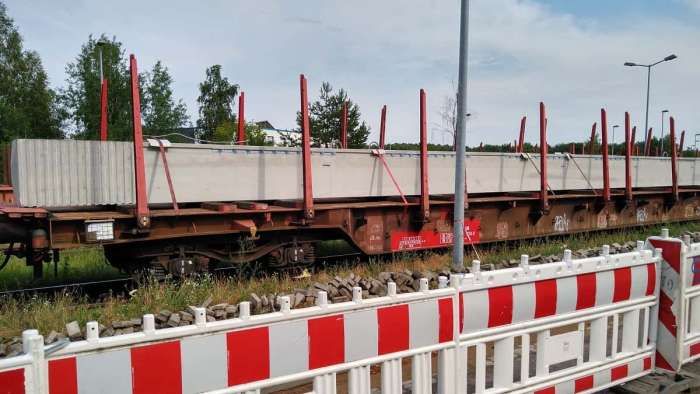 Last Friday, after Teslarati published a story, titled “Tesla Giga Berlin’s Building Structure Is About To Begin,” Tesla CEO Elon Musk replied to the tweet writing “Giga Berlin is gonna rock!” In the meantime the second train with beams is unloaded today at Giga Berlin as Tesla starts to build the structure of the car factory's building.
Advertisement

Welcome back dear subscribers and friends. We have some rich materials from our local friends from Grunheide in Germany about the status of Giga Berlin and its construction. Jurgen, Tobias and Albrecht have shared some good videos and unique images, which you are about to see here. Tesla CEO Elon Musk also feels the excitement tweeting "Giga Berlin is gonna rock!"

Our friend Jurgen took a close look at the 2nd train with concrete cross beams and concrete beams, these will be unloaded on Monday and transported to the Giga Berlin. For those of you who are interested, you will also see some close-ups of the concrete girders of "Max Bögl" company, which are used on the Giga Berlin. As you may already know from Torque News’ previous reports "Max Bögl" company is the construction contractor building Tesla’s Giga Berlin electric car plant.

Currently, there are two fully loaded trains right now. Pillars, Beams, and 2nd-floor elements. You will see the latest pictures of Giga Berlin from the east, from the north, from the north with gravel store area in the center, as well as cranes with beams. As you may remember, last week the first tower cranes came and were installed to get ready to build Tesla's first European Gigafactory. In the North-east you will see an area where beams and stakes are stored. There is also yet another foldable crane getting ready to work today.

After Tesla builds the Giga Berlin it's going to have a huge impact on the local economy and the population growth. Image, 12,000 people will work in the plant at at the surrounding supporting businesses. The population of Grunheide is only about 8,000 people.

As our friend Andrew Graner notes "Aerial views show that a surprising percentage of factory footprint has now received plate foundations. Regarding the local population growth issue; the railway plan for the area assumes most of the Tesla workers will train in from Berlin city. It's only a 30 mins commute. Undoubtedly there may be some production staff brought in from neighboring Poland who will need high density Monday to Saturday accommodation."

Indeed, this is a very exciting time for Giga Berlin and Tesla. Stay tuned for more updates later today as our local friends send more materials related to this developing story about Tesla’s first European Gigafactory, building built in Grunheide, Germany, outside of Berlin.

Tsingshan's Threat to Tesla: EV Maker Is In Battery Crosshairs
Tesla-Funded Research Reveals One of The Biggest Mysteries of EV Battery
END_OF_DOCUMENT_TOKEN_TO_BE_REPLACED