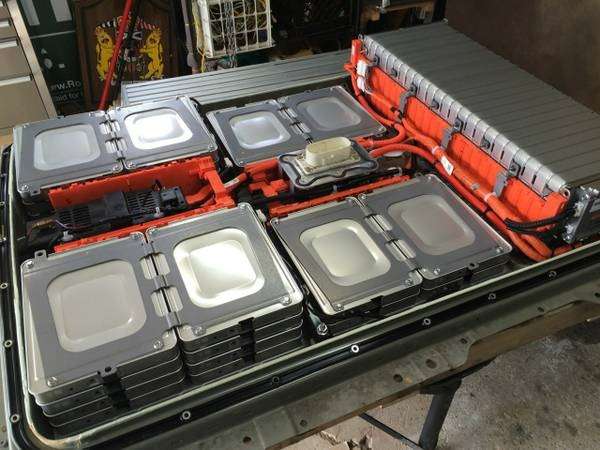 A company, named Hybrid Industries, has posted a message on Los Angeles Craigs List offering to install double batteries on any Nissan LEAF increasing range to 160 miles on a single charge. The announcement says they can prove it works. The price is 6,500 dollars and this announcement has promoted an active debate in SF Bay Area Nissan LEAF Owners' group on Facebook.
Advertisement

Hybrid Industries says "We are upgrading any year any model Nissan Leaf. The system is now 2 times larger, the factory battery system is 24KWHR which is good for 80 miles, this is now 48KWHR which is good for 160 miles total. No additional computers necessary, this is a complete battery system upgrade. This upgrade is much more reliable, gets 160 miles per charge, the factory charger charges the second battery as well, no need for any additional components."

Conrad Encarnacion asked in the group if any of the Leaf owners are with this site before he can inquire on a similar setup, but on a different car. Here are some of the replies from number of LEAF owners in the area, which will give you a pretty good idea how they feel about this offer. "If its installed properly this should work! In the past we've heard and seen something like this done only in a import cars like the Prius and now the Leaf. So far never seen done in domestic car like the Volt," writes Encarnacion.

Julien Pierre
I checked their web site. It costs $6500 to add 24 kWh, with only a 2-4 year warranty . I have never heard of the company before and who knows if they would still be around to honor the warranty by then.

Presumably, one wouldn't get more than 160 miles because the existing Nissan battery is likely already degraded to some degree by the time you would add theirs. The new battery also adds weight, which reduces miles/kWh. And of course it depends on driving patterns. Even with a brand new 2012 Leaf, I never got 80 miles per charge, so I wouldn't expect 160+ even with a brand new 48 kWh battery.

I think it's great that this option exists, but at this cost, if I still had a Leaf, I would probably be too worried about the terms of the warranty & support to go for it. With a better warranty - say, a Leaf with a 48 kWh Nissan battery that costs $6,500 more - it would be a much more useful option. There isn't any vehicle with that size battery currently. Even the RAV 4 EV only had 41.8 kWh. And Tesla starts at 60 kWh. So, 48 kWh is an interesting positioning with nothing on the market today.

Brian Henderson
While interesting, the installation will turn a 5-seat LEAF into a 2-seat LEAF with ~ 2/3 of original cargo volume. One concern is no cover is pictured to enclose the battery cells internal to the cabin. (The pack voltage is ~400 volts and would be capable of delivering ~180 kW power, ie: great balls of plasma). Overall a good idea, but comes with some constraints.

Editor's Note: Judging from the picture, it looks like this is not going to effect the back seat, but may effect the cargo space.

Vijay Lakshman
Looks like it is installed in the trunk/cargo space, so don't think you would loose 2nd row seating. This is completely DIY and not sure if LCU will communicate to VCM. There is gonna be a lot of unknowns.

Matt Falcon
Interesting to know if they simply double each individual cell, and rely on the Leaf's BMS to understand the new capacity. That's been my only theory as to how someone could extend the Leaf's range - by pairing a second cell with each existing cell to make the whole system "bigger". It'd require a hell of a lot of wiring!

Joe Emenaker
Doesn't look like an upscale operation. Notice the overturned Rubbermaid tub over some electronics in the first pic and the dart-board and milk-crates in the fourth pic. Now, having said that, if you need your EV to go further than 100 miles (and you don't want it to be a total Frankenstein EV conversion freak show), right now one of your only choices is to drop $70k on a Tesla. So, spending $6,500 to make your Leaf do that is very compelling.

It also looks like they do this without compromising the back-seats (as you can see the backs of the 60/40-split seats in the first pic. I doubt that they have a nice cover, yet, but I imagine that they're working on that.

Sure, these guys look like a startup, but it's a cool idea, and there *is* demand, and the price is reasonable. At this early stage, I figure that you're going to have some issues with it, which I'm sure they'll work hard to fix, as they want the early adopters to have good things to say, or they're doomed. For this reason, unless you work nearby (so that they can easily come tweak it), I'd pass.

Matt Falcon
Somewhat dismayed by how they say "ask about the 12KWHR charger" though, like they have little grasp of the kW/kWh terminology. That's... unsavory.

Editor's Note: Could this be a carry-along emergency charger?

Nick Rothman
Hats off to these guys for making something new and cool available to the public. Of course there are bugs it is an all new product. I would love a long rang kit in my leaf.

Kevin Lieberman
I'd like to hear an independent audit of the system to see if it is for real. If so could be great for the Leaf! I'd be 4x happer with the car with 2x range.

greentrans wrote on March 2, 2016 - 12:52am Permalink
Its totally feasible and is actually very basic in terms of theory, and mostly you wont need to replace any component for double power ratings except you will only have to come up with the space for those extra cells, and if leaf is capable of going into ludicrous mode because of the double reserve capacity, then you might needs extra heavy wires running to motor, but that could/would be limited by the software.
Glenn N Davis wrote on May 19, 2016 - 4:51am Permalink
I called and it seems that they install a complete second battery under the hatch back and you have to charge it separately. This means that it is VERY simple and likely works very well! My use case is likely more or less ideal for this battery since i typically drive 3 x 17mile trips/day that is 34 miles round trip x 3 is about 100 miles. I have seen 30000 miles in a year ALL in LOCAL DRIVING. They also seem to indicate that the 30kWh battery is not currently amenable to this simply because these use different electronics and not compatible. They also seemed to have a kit for it. It was a pleasure to talk with them and they seemed to have thorough knowledge of the answers to my questions. I have yet to buy my Leaf but when I do I expect this option may be the only workable solution to my particular problems. Single phase CHAdeMO chargers not being available to me to buy. (Siemens qc24s single phase 240V i 24kW charger is not available to buy YET.
Mike wrote on November 1, 2016 - 3:15pm Permalink
I would imagine, that the graphene battery as a replacement of the original one would deliver a triple of capacity with less of space. This technology will completely change the world of EVs. Who can offer it first will win the market for the next decades. The best production technology of graphene is developed in Poland. Who can compete with them in the USA?
gilles beaudry wrote on August 21, 2017 - 7:29pm Permalink
i have a question. If i open a battery pack of 24 kwh (Nissan Leaf) and remove the 48 modules only, leave all the electronics there, and install the 48 modules of a battery pack of 30 kwh, is this going to work. I know that the modules are the same size because i have the dealer repair chapter of the battery pack of nissan leaf 2016 (1600 pages) and both battery packs are in this repair chapter (24 and 30 kwh). The modules for the 24 kwh battery have 500 watts each and the modules for the 30 kwh battery have 625 watts each. thanks