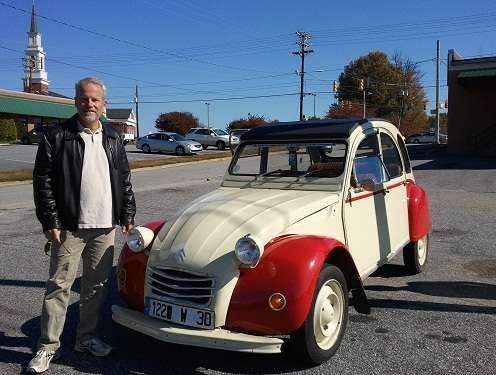 The Citroen 2CV: When Green is Old

There are lots of things to admire about the French: their celebration of individuality, contributions to the arts and philosophy, haute couture and haute cuisine, just to name a few. But the Citroen 2CV embodies two that I particularly admire: the French penchant for thrift and a relentless pursuit for what is both simple and finely executed.
Advertisement

Despite broad popularity in Europe and Asia throughout its more than 40 years in production, the two-cylinder, 600 cc, “boxer” style engine “Duck” was never a hit in the U.S. Great distances, superhighways and love of power and luxury seem to conspire against a car of such modest means. Even 40 miles per gallon was not enough of an enticement, especially when US fuel prices were well below Europe’s.

I rode in one in California in 1982 and I never forgot it. I was astonished to find out from the owner that the car was not that old. To me the body style was a throwback to the huge fender skirts, rounded bodies and running boards of the 1930s. In fact, Citroen was content to refine rather than reinvent over the years. After all, it was the enduring aesthetic of the engineers that drove the design: keep it simple.

I got my 1970 “deux chevaux” on ebay in the spring of 2010. I didn’t expect to be the highest bidder and I admit to a few beads of sweat as the clock ticked down to zero. “I am a musician, what do I know about project cars,” I thought. Then the car arrived and my thoughts became simpler, perhaps already under its influence. Under the hood, no radiator, no distributor, no a/c system.

No bravado inside, either. A front vent opens with the turn of a crank and there are only two switches, one for the wipers and another for the hazard. You have three headlight choices, low or high beams, or the option of one light only (I still don’t get that last one). The lights can be adjusted up or down, to accommodate road conditions or heavy loads.
I quickly learned that simple design and thoughtful engineering comes with a straight-forward personality. A car that asks only that you drive it is a far cry from most people’s notion of a car these days. We get around in rolling living rooms, sipping coffee and talking on the phone. You can’t do any of those in the 2CV. That, for me, is one of its charms.
The shifter for the four-speed manual transmission goes through the firewall instead of to the floor. You must learn to twist the shifter left for both reverse and first gear, and right for fourth. The suspension has an extraordinary amount of travel, making you feel at first as if you will roll it as you arc into a turn. But the thin tires hug the road like mother and child.

The suspension was a big selling point for the French since the 2CV was originally intended, to paraphrase it’s chief engineer and Citroen vice president, Pierre-Jules Boulanger”… to carry a farmer, his wife, and a load of fresh eggs across a plowed field to get to market…without breaking a single egg!”

To adjust to a life mostly on city streets, my brilliant mechanic, Mike Becker, figured out a way to install small shocks in front, greatly reducing the up and down bounce over bumps. The result, to my American sensibilities, is a driving experience like a very fast go cart!

Some quick features: The windows fold up and the roof folds back halfway or rolls back all the way, like a sardine can. All the seats are easily removed and it holds a huge amount of cargo: not just for its size but in comparison with my “real” car, a Mitsubishi Outlander. Citroen’s print ads feature this, tilting toward the absurd with a picture of the “snail” carrying a grandfather clock in the back!

The height of the car can be adjusted, from low rider to over a foot of ground clearance. It weighs only about 1000 pounds and is made of sheet metal. In a crash it would not meet force with force, but would more likely be pushed out of the way. It has front wheel drive and sealed bearings too.

Driving it is so much fun that it makes my ten-mile commute to work seem like a mini vacation. It loves to run full out, revved high and will do it all day long. You can “hang ten” around the curves, floor it and float through the changing terrain. And you feel like you are really driving…fast! In truth its top speed is 110 kilometers per hour, or a little over 60 mph. So it’s not really at all fast but most of the time I end up stopping at the same red lights as the cars that pass me en route. I just arrive a little later.

And it’s tough, not least because there’s not a lot to break that can’t be pretty easily fixed, unless you are talking about taking the engine out (which only weighs 250 lbs, by the way). In the 1970s, as a publicity stunt, Citroen sent a small fleet of the 2CVs from Paris to Morocco and back. All made it back in great condition, despite taking on some of the harshest road conditions imaginable.

The Citroen 2CV shows us that simplicity and superb engineering and design are not at all incompatible, given an absolute commitment to both. It reminds us that driving can be fun without being aggressive or costly. And perhaps most importantly it rehabilitates our desire to just simply take life as an adventure.