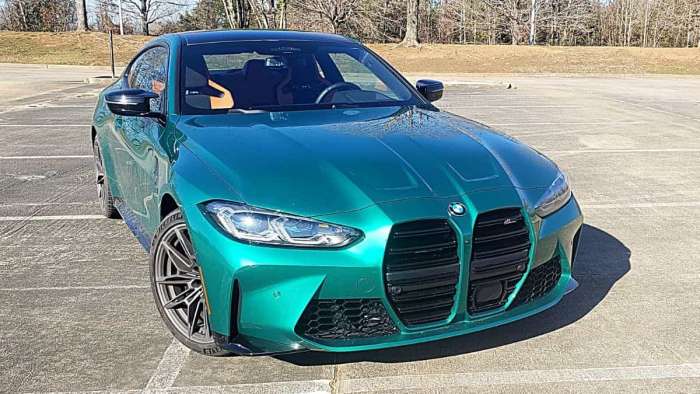 In BMW's performance department the M3 is fast and refined, the M5 is fiery, the M8 is aggressive and stylish, the M4, which Torque News is reviewing this week, is the one that impressed us with its technological advancement. We have been driving the 2022 BMW M4 Competition xDrive Coupe and we think the technology in the car is what stands out the most.
Advertisement

The range of the BMW M3 and M4 family has never been so diverse. In addition to offering a coupe, a sedan, rear-wheel drive, integral models and even manual and automatic gearboxes, not to mention the imminent arrival of a CS version, a convertible variant is now added to the range. But this week our review is about the Coupe version of the 2022 M4 Competition.

It's the xDrive Coupe. Let's me get started from the xDrive. If you are not familiar, the BMW xDrive is the company's all-wheel drive system. Just like Mercedes has the 4MATIC, and other car companies provide their 4WD systems just Four-Wheel or All-Wheel drive. What it does, it provides the vehicle high traction no matter where you are driving.

After the vehicle was unveiled recently, one thing that stands out in the exterior is that the oversized grille is here to stay. The design is daring. The wings of the vehicle are exaggeratedly drawn. The sides are very sharp. With the exception of the number of doors, it is only easy to distinguish the BMW M3 from the BMW M4 from the rear, where the lights differ and are taken from the BMW 3 Series and 4 Series respectively.

Its mouth is explosive! And when you finally observe it for the first time, we can only be positively surprised by this stylistic bet. 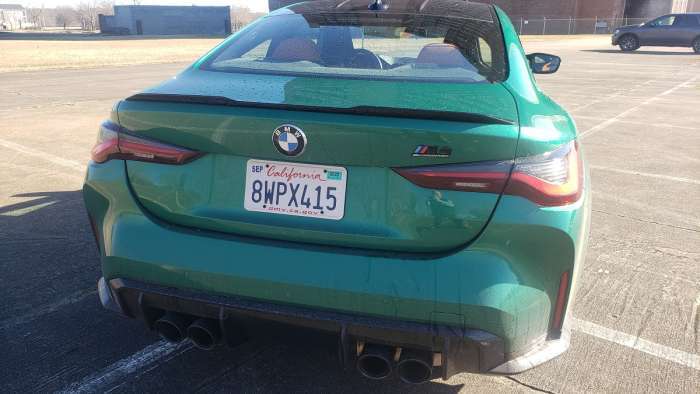 The grille in the shape of the famous pre-war double bean is now stretched vertically.

The M4 also gives the change with a carbon roof as standard, a finesse that serves lightness but also recalls the incredible M3 CSL . All-round carbon, big rims, different sizes between the front and the rear, 18 and 19 inches, as standard, or 19 and 20 inches as an option with the integration of ceramic-carbon brakes 400 mm in diameter. Two double tailpipes, rear extractor, impressive shoulder, it simply thrills.

The Engine and Power

Under the hood there is a 3.0-liter BMW M TwinPower turbo inline 6-cylinder engine with the variable valve control (Double-Vanos and Valvetronic) and high-speed precision direct injection. The performance and efficiency is also provided by the 8-speed STEPTRONIC automatic transmission with Drivelogic. The 2022 BMW M4 Competition xDrive Coupe provides 510 HP at 6,250 rpb and 650 Nm of torque available from 2,750 rpm. This is a huge of a progression compared to 431 hp, then 450 hp in Competition version of the previous BMW M3 and M4. A specific exhaust with electronically controlled valves is also on the menu to allow the 6-cylinder engine to express its full range.

The big news is that power of the 2022 M4 can be sent to all four wheels via an optional all-wheel drive. As I explained above, called M xDrive, it is equipped with ROAD, Sport and TRACK modes.

With 4.79 meters long, the new BMW M4 is indeed closer to the BMW M8 (4.87 m) than it is of the old BMW M4 F82 (4.67 m). To ensure decent dynamic behavior, BMW has not skimped on structural reinforcement in favor of rigidity, in particular by means of firmer silent blocks and reinforcements at the level of the front and rear subframes.

The interior of the BMW M3 and M4 also leaves no one indifferent and whets the appetite of any speed fanatic. On the one hand we will have the classic instrumentation of the new BMWs, with a 12.3" digital instrument panel and a 10.25" screen in the center with a fairly complete interface and adapted to online services. On the other hand, its cabin is a delight for speed. Firstly, for the bucket-style sports seats with the illuminated M logo, which ensure good support on track-days and comfort for day to day. 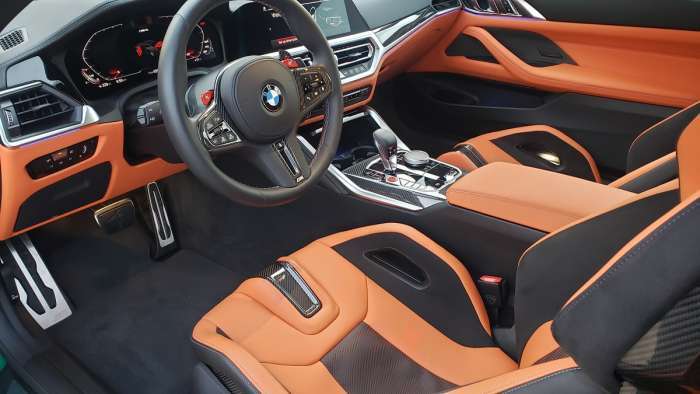 Unsurprisingly, the interior is probably what changes the least compared to the BMW 3 Series and 4 Series. We still note the presence of a specific steering wheel with large paddles as well as two red buttons (M1 and M2) allowing to call up pre-configured driving modes on the fly via the infotainment system, a profusion of carbon plating and wraparound sports seats. But since we are driving and reviewing the 2022 M4 Competition xDrive Coupe, we got the carbon-shell bucket seats, which give the interior and beautiful effect, but it's hard to get in and our of those bucket seats. Yet, I seem to get used to it. 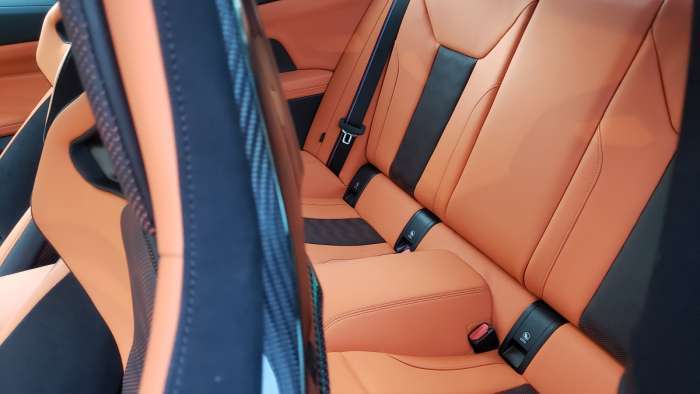 I read that those carbon-shell bucket seats reduce the total weight by around 25 kg and also includes carbon-ceramic brakes, as well as forged rims (18 inch front and 19 rear rear wheel drive, 19 and 20 inch M xDrive), which can be wrapped in semi-click tires. BMW leaves the choice free of charge between a carbon roof or a sliding glass roof. 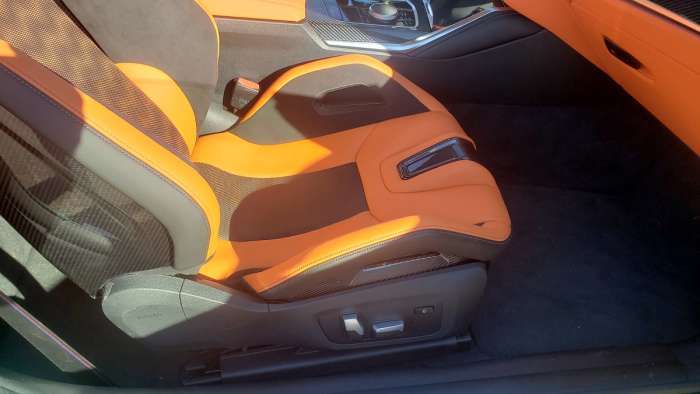 The driving position feels remarkably low, as in any good sports car, and reveals some of the bulk of the hood. What's great from the driver's seat is how accessible the controls are for everything that involves car dynamics.

The bill is steep. the 2022 BMW M4 Competition xDrive Coupe starts at $78,800 MSRP. But when you add options the price gets to $95,344. Here, the M4 competes against the Jaguar F-Type, Porsche 911 Carrera and the Audi RS5 with comparable prices and Horse Powers. The 2022 BMW M4 Competition xDrive coupe gets 18 miles per gallon and its city/highway fuel economy is 16/22 respectively. This is not a family car.

To drive, it's phenomenal and rough! Let us never forget that BMW is first and foremost an engine manufacturer, and that the dazzling accelerations which approach 8,000 rpm make you cling a little more to the hoop, even though you are already well wedged in incredibly sculpted bucket seats - combining leather and carbon. This engine is expressive, better, it gives off a firepower, a diabolical character whose rather serious sounds evolve with each speed. The exhaust loud.

Braking becomes adjustable! It uses Dynamic Brake Control and Cornering Brake Control, which can be adjusted according to needs or comfort. In short, the adjustment system varies the stroke of the pedal. And in use, the sensations are not the same. Soft or Hard on the attack with the right foot, it stops this powerful vehicle.

The traction control, with the management of traction, is adjustable in 10 positions leaving the device more or less permissive according to needs. No matter how you drive, as always with a BMW, you remain glued to the asphalt, without risk. The adaptive suspension, the driving modes, also allow very precise adjustments on demand. 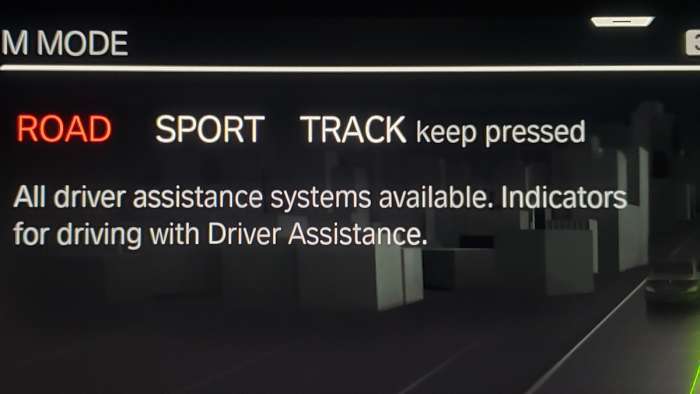 The ease of driving makes it a car that you can enjoy even off the track. It will surely be a joy on mountain roads.

By the way, the first 100% M battery electric BMW will be launched next year ; it should be the XM SUV of which a concept was recently announced with a teaser image. BMW plans to celebrate 50 years of M at various prestigious automotive events throughout 2022, such as the Concours d'Elegance at Villa d'Este (Italy) in May, The Nürburgring 24 Hours in the same month, the Goodwood Festival Of Speed ​​(UK) in June, and the Pebble Beach Concours d'Elegance (USA) in August. In fact, some of the new vehicles may be unveiled there, reports Automobile Magazine.