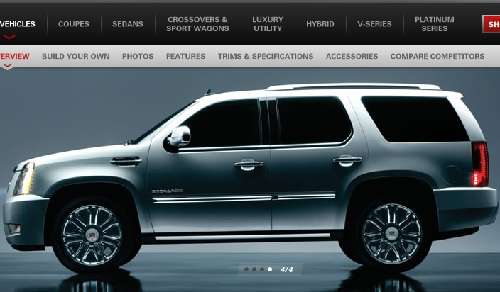 GM was quick in responding to Highway Loss Data Institute's (HLDI) release that placed Escalade on the top of the most stolen cars. The company now says the 2012 Cadillac Escalade will be delivered with a 4-point ani theft system.
Advertisement

“We are currently implementing four new pieces of ‘armor’ on Escalade intended to reduce vehicle thefts, particularly those called push away,” said Bill Biondo, GM’s global lead, vehicle theft prevention. “We are committed to beating the thieves and expect these new theft deterrent systems to greatly reduce the Escalade’s rate of theft and lower its position on HLDI’s list.”

The company says it has been working very hard to improve its theft deterrent technologies on the Cadillac Escalade. GM is aware of Escalade's high rate of theft and is moving quickly to address the problem. So far the efforts have beard some fruits and have lowered the rate of Cadillac Escalade's theft since 2009. The car has a complex cryptographic immobilizer system called PASS Key 3+. GM says PASS Key 3+ has been successful to "greatly thwart drive-away thefts." The steering column lock system, which is installed on all Escalades have helped to prevent push away type of thefts.

On Start system is always available in many Cadillacs, which help to locate a vehicle and immobilize it. On Star also helps to slow down the car when the police is on the scene. Speaking of Police, GM says it works closely with the low enforcement agencies and this cooperation helps to understand what is actually occurring in the field so the car maker can continue to further improve its anti theft solutions.

Thus, in the 2012 Cadillac Escalade the company has come up with 4 solutions to further improve its anti theft system.

Better steering column lock system. It makes it nearly impossible to maneuver the Escalade. An available inclination sensor that sets off an alarm when the system senses a change of the angle of the vehicle. An available shock sensor intended to reduce content theft and push away theft by sounding the alarm when the vehicle is “shocked” such as breaking the glass. A new wheel lock system is available to help prevent the theft of Escalade’s wheels and tires.