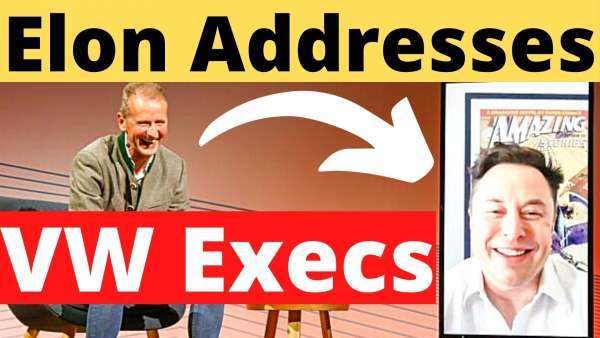 Diess connected the Tesla boss to VW's management conference via video. Musk explained what was behind Tesla's high productivity - and dispelled concerns about e-mobility.

Very interesting and surprising developments are taking place between Tesla and Volkswagen. Between VW's Herbert Diess and Tesla's Elon Musk.

The Volkswagen executives did not expect this at their meeting in Alpbach, Austria: After his lecture, in which he had once again warned against US rival Tesla, VW boss Herbert Diess unceremoniously switched Elon Musk and added him to the discussion at the VW executive conference Thursday evening. The Handelsblatt learned this from participants and in this report, I am going to go into detail about what happened next.

According to Handelsblatt sources the VW CEO Diess included Elon Musk at VW's executive summit last week Musk explained what's behind Tesla's high productivity - and dispelled concerns about e-mobility. That's I believe unprecedented in the industry but the right step Great move from CEO Diess and a big Thanks to Elon showing he is not the enemy but a friend!

Elon says "Volkswagen is an icon, I drove various VW models and a Porsche 911 myself for a long time," Diess asked why Tesla is so much faster than the automakers, Musk replied, "It's the leadership style. I'm an engineer first and foremost, and besides cars, I'm fascinated by supply chains, logistics, and production processes." The VW Group will master the change, Elon said, he sees VW as his biggest challenger Tesla must become even faster and more productive than other car companies, "Despite all our successes, we still have to get better.”

With a new mindset & a revolution in our headquarter Wolfsburg we can succeed the new competition.Good meeting with 200 top managers in Alpbach. Big responsibility at a crucial point for our company. Thx for joining @ErinMeyerINSEAD & @elonmusk,we will visit you soon in Grünheide pic.twitter.com/dwYyXZnBT8

I read a very interesting tweet-comment under Diess' tweet. One person wrote "Being honest about the reality of your situation is a breath of fresh air. All OEMs need to take this approach.
Your VW Group chair members should be grateful they have someone who recognizes how serious the next decade is. My advice is BUY Gigacasting from IDRA."

LG's New EV Battery Plant Is a Welcome News for Tesla
Tesla Giga Berlin's New Hurdle: It's Not Only the Gov't, but Now Tesla Itself
END_OF_DOCUMENT_TOKEN_TO_BE_REPLACED