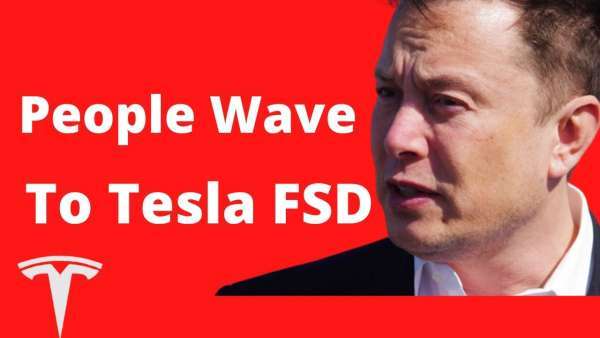 Notice how his started is moving over to give the bike extra room before it was even in the driver's field of view. Tesla, equipped with the full self driving software can do this because it has eyes facing every direction at all times.

Also, I find it funny when people wave to thank his Tesla for stopping, not realizing the human driver didn't lift a finger and it was the FSD software that stopped for them.

Robots are already walking among us @elonmusk pic.twitter.com/HSuDDuGwvQ

In the meantime, Tesla is set to release a new version of the Full Self-Driving Beta program this weekend with Software Update 10.12, and CEO Elon Musk even said the automaker could expand the size of the Beta fleet in June.

Tesla FSD apparently works really well for many Tesla users. "The current FSD has been working really good for me I only disengage for people that tailgate me (reminder for everyone that you can’t compare the progress to a competitor). Thus, I am supper happy with the progress so far and it’s worth every cent of the FSD price if it just saves one life," comments Ben Crilly under Teslarati's coverage of FSD today.

User Tomas Acquinas notes that according to Elon Musk there are 100k FSD users. If each FSD user has driven just 2000 miles with FSD, that's 200,000,000 miles of driver-monitored FSD. I haven't heard of any deaths or significant accidents. "That's extremely impressive, even with the human monitoring. The US car accident rate is one accident per 500,000 miles. That would make human-monitored FSD about 400 times safer than human driving."

"There are several factors that may explain the low accident rate for those using FSD," notes Clara Smith under Teslarati's coverage of the topic.

1) As is stated ad nauseum, FSD is used mainly in benign driving situations.
2) Tesla drivers tend to be better drivers.
3) Attention to the road is increased when FSD is engaged.
4) FSD actual does enhance driving safety.

Do you agree with these factors?