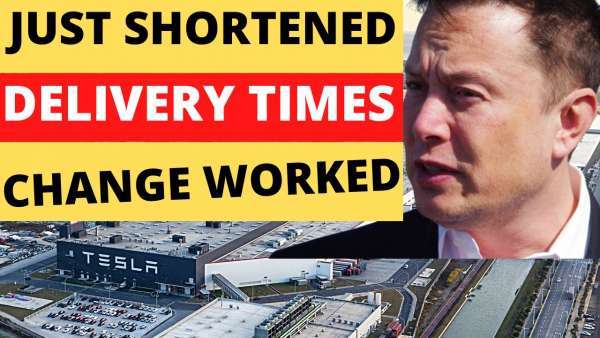 Tesla has changed its delivery times in China. It has improved it and here is what triggered the change, shortening it by two weeks.

Tesla Giga Shanghai just reduces its delivery time for Model Y and Model 3 by two weeks in China, CNEVPost reports. Watch and see how Tesla achieved a shorter delivery time and what triggered it.

The expected delivery date for the rear-wheel-drive Model 3 in China is now 14-18 weeks, according to information on the Tesla website first spotted by CnEVPost. That's two weeks shorter than the previous 16-20 weeks timeline.

CnEVPost notes that improve changes to Tesla delivery times in China may be related to the production line upgrades at Tesla's Shanghai plant, which currently only produces the Model 3 and Model Y.

On July 22, local media outlet Auto Time reported that Tesla began upgrades to Giga Shanghai in July, with the line responsible for producing the Model Y completing the upgrade on July 16.

Why It Matters. This mean Tesla's modernization worked and paid off.

The Tesmanian's Eva Fox writes that "Although production results declined in July, they will recover starting from August, gradually increasing as the installed production capacity is now higher. It is likely that the reductions in delivery times on the Model 3 and Model Y have decreased due to the fact that the factory is now able to produce many more vehicles than before."

Tesla Contemplates A New Strategy for China Retail even As Sales Boom
Jay Leno on Elon Musk & EVs: “I Think He Should Get ... Credit"
END_OF_DOCUMENT_TOKEN_TO_BE_REPLACED