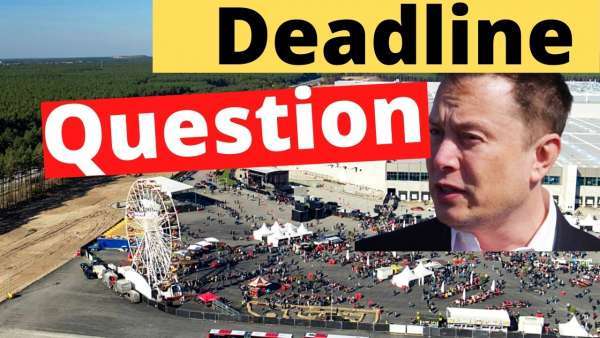 Most people wonder when Tesla Giga Berlin will receive the permit, but the much more important question is whether Tesla could begin production immediately after receiving it.

I saw this question asked today on Twitter by a Tesla news provider and blogger Alex Avoigt and wanted to share with you guys for discussion.

Sawyer Merritt, who is another popular Tesla blogger on twitter, replied and said “I am told they could start in as little as 2 weeks. Maybe 4 if they need more time calibrating, etc.”

Another person says he is told Tesla can start the production of Model Y electric crossover at Giga Berlin immediately. You know, limited production has already started at Giga Berlin, but those cars can't be sold so are used on-site. Some were transported away recently.

Could Tesla already produce them, but store them somewhere while waiting for the final permit? No, that’s not allowed. Tesla can only sell vehicles that are produced after the permit has been received.

Also, Tesla Giga Berlin’s suppliers are in for a while. Tesla is able to store supplies at the facility even if they don’t have the final permit. This means Tesla doesn’t need some time to stock car parts and supplies in order to start production. This means Tesla can possibly start the production at its Berlin Gigafactory almost immediately, unless other logistical issues prevent it from happening immediately.

On the same Twitter discussion, one person commented and said “According to visitors talking to employees at the Giga Berlin town fair, the factory could be ready to go almost immediately.” You know, Tesla has shown the ability to move quickly.