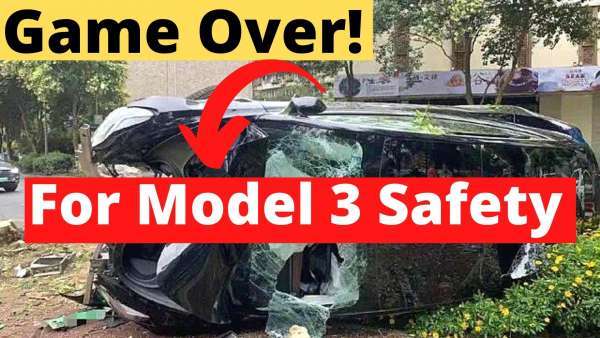 Tesla Model 3 safety and reliability ratings will probably get another boost after you see the aftermath of this accident in China and how everyone walked about safely and unharmed.

"Model 3 was speeding at 4am in Chengdu, China, and the driver lost control, knocking down a tree and a light pole. The driver and passengers all walked away unharmed. Incredible," this morning tweeted a Twitter user Ray4Tesla who regularly shares breaking Tesla news on Twitter.

Model 3 was speeding at 4am in Chengdu, China & driver lost control, knocking down a tree & a light pole. Driver & passengers all walked away unharmed. Incredible. pic.twitter.com/sX0jgd41Df

First I want to say that I am glad to see no injuries and everyone walked away safely. I read on social media that among other things, Tesla car's safety is the reason why a number of people want a Tesla vehicle. “I want safety for myself and the people I drive with,” one person commented on Twitter. Safety should be on the top of the priority list when considering buying a car anyway.

Tesla Model 3’s safety is amazing. The car is crumpled and unrecognizable after the crash, yet the passengers and driver walked away. Much wow.

You see, in this case, we can say that Tesla Model 3 is a very safe car, even though some Tesla drivers aren't. Yet, some people are worried that this all changes with the removal of the radar and replacement with Pure Vision technology. “Tesla's are no longer safest cars in the world,” they say.

But Tesla vehicles without radar still have Autopilot safety features despite what the media is saying, Electrek reports.

The background is that Tesla announced the transition to its “Tesla Vision” Autopilot without radar, and it warned that it would result in limitations of some Autopilot features at first.

Tesla only mentioned limitations for Autosteer and Smart Summon and not any of the important active safety features that are powered by Tesla’s Autopilot, like forward collision warning and automatic emergency braking.

Let me know please your thoughts about the Model 3's safety in the comments section below.