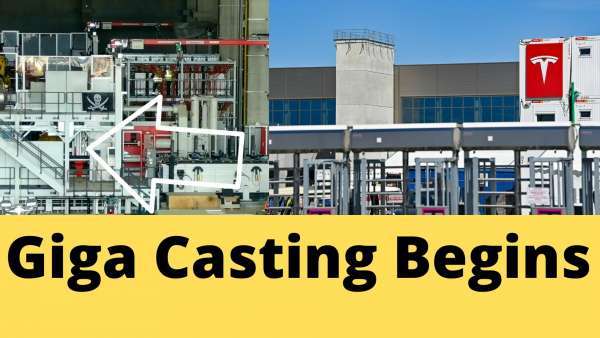 "GigaBerlin Conjectures. A follower pointed out to me that he has discovered that in the first Gigapress is already inserted a 'press mold tool.' It could go off therefore shortly with test casting. Probably," Twitter Jurgen at GF4Tesla.

Is it just me, or is it apparent that Austin is going to be operational before Berlin? The catch-up rate is astonishing. At the very least, in Austin the battery factory construction is way ahead; the Gigapress is in initial production, and in Berlin?

To be fair to the Germans the presses look more complete and additional structures built around them than Texas. The first is nice. But quality is more important.

Someone wrote that nobody confirmed the test pieces that showed up a few weeks ago on Twitter? To this question, Jurgen replied, writing, “Yes, the test parts came to Giga Berlin from Texas, it was confirmed several times.”

Another question on Twitter was “is Giga Berlin’s exhaust pipe chimney for the aluminum furnace connected yet?” Another person said he agrees to this and writes, “that’s what I was also thinking. That might have been partly why they didn’t finish the roof at first. The propane tanks have been on site for a long time and possibly just exhausted in the open roof area? They will need an exhaust chimney for the second one.”

A lot of people are asking, why is Giga Berlin now so far behind Gigafactory Austin?

Toyota vs Tesla: Which Stock To Buy These Days
For Some Former Daimler Managers Daimler Is Authority, While Tesla Is Like a Startup
END_OF_DOCUMENT_TOKEN_TO_BE_REPLACED