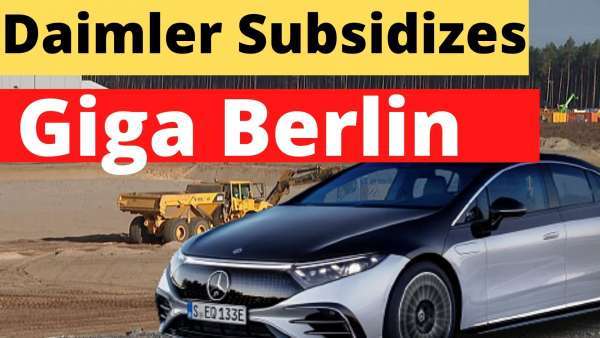 Daimler has set up generous severance pay programs as part of a savings program with which the car manufacturer wants to cut around 10,000 jobs.

Business Insider spoke to former Daimler engineers who have received severance payments of around a quarter of a million euros - and are now starting with competitor Tesla.

Experts warn that Daimler is unintentionally cross-subsidizing its competitor Tesla at the Giga Berlin with the large severance payments.

At the beginning of last year, Daimler decided on a hefty savings program that, among other things, includes shedding around 10,000 jobs worldwide. But the employees in Germany end up softly because the Stuttgart-based company has put together lavish severance pay programs. Collective bargaining employees who have been working in the administration of Daimler AG, Mercedes-Benz AG or Daimler Truck AG for at least three years can claim the severance payments. Certain executives, team leaders, and foremen are also entitled to the program.

The Stuttgart-based company is paying sums that, according to experts, will probably no longer exist in the automotive industry anytime soon. Ex-Daimler engineers that Business Insider spoke to received around a quarter of a million euros, a golden handshake. These former employees are around 40 years old, have a large part of their working life ahead of them, are very well trained, have the ambition to advance - and are now applying to Tesla.

Tesla at the Giga Berlin factory pays lower salaries than Daimler, VW or BMW - attracts applicants with lavish blocks of shares in the mid-five-digit US dollar range. The drop in wages doesn’t bother the ex-Daimler men very much, after all, they have a thick severance cushion that they can fall back on.

Ex-employees, but also industry experts, are wondering why Daimler launched the severance pay program at a time when Tesla, its main competitor, is desperately looking for staff in Grünheide.

"Daimler operates unwanted cross-subsidization of new Tesla employees," says car expert Dudenhöffer. "The Americans know about the severance pay program and can hire former Daimler employees much more cheaply because they cut their income because of the money cushion."

It is also really an unfortunate timing that Daimler chose for the severance pay program, "even if I am sure that the Stuttgart-based company could not have delayed it much longer," adds Dudenhöffer.

This "indirect subsidization" by Tesla comes at a time when competition between Stuttgart and the US car manufacturer is intensifying significantly. This year, Daimler is launching three new fully electric models that are direct competitors to Tesla models: the EQS, the EQE and the EQS SUV. In such a sensitive phase of market entry, car companies are hoping for some tailwind, good weather at the start of sales, secretly perhaps also for small breakdowns with the competition.