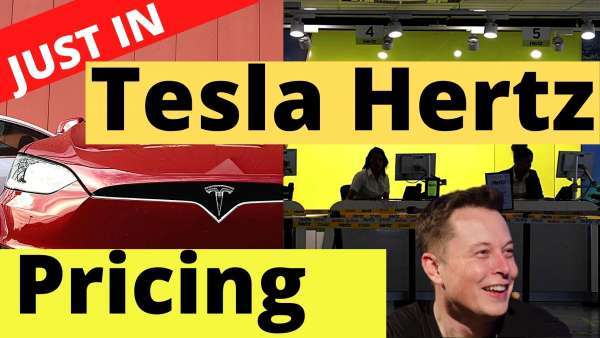 Just minutes ago Tesla CEO Elon Musk responded to a question about how much Hertz has paid for 100,000 Tesla vehicles, revealing that Hertz didn't get any discount and will pay the same price as Tesla customers pay.

"To be clear, cars sold to Hertz have no discount. Same price as to consumers," Musk wrote on Twitter, responding to a Tesla enthusiast question.

To be clear, cars sold to Hertz have no discount. Same price as to consumers.

What a way to start the week. Tesla gets an order for 100k cars from Hertz. Huge move and super smart. Rentals are in huge demand and going green! The rental fleets need replenishment.

Elon also tweeted that he is surprised that it was the Hertz deal with Tesla that moved the stock because to him Tesla doesn't have a demand problem, but rather a production ramp problem.

Musk responded to a tweet on this question and said "Strange that moved valuation, as Tesla is very much a production ramp problem, not a demand problem."

Elon Musk's revealing Tesla's pricing for Hertz also puts another question at rest according to which certain business reporters believe this sale to a rental fleet is an indication of low demand since "car people" say so.

Obviously, it is not, because as Tesla CEO Elon Musk said, Tesla doesn't have a demand issue, but a production ramp issue.

Elon Musk's tweet also raised some interesting questions. For example, will the Tesla vehices from Hertz come with an FSD package? Did Hertz even ask for one? How will the rollout work?

Hertz paid the same amount as a regular customer, while advertising the Model 3 on their home page and YouTube channel. This is why Tesla doesn’t need to pay for advertising!

Some people say pretty soon there will be a one-year wait for a Tesla. Hopefully giga Berlin and Texas can start pumping them out 24/7 to catch up with demand.

Does anyone know how charging will be handled with rentals originating after Jan 31, 2021? Will it be billed by Hertz with the usual "service fees" and "markups"?

LG's New EV Battery Plant Is a Welcome News for Tesla
Tesla Giga Berlin's New Hurdle: It's Not Only the Gov't, but Now Tesla Itself
END_OF_DOCUMENT_TOKEN_TO_BE_REPLACED