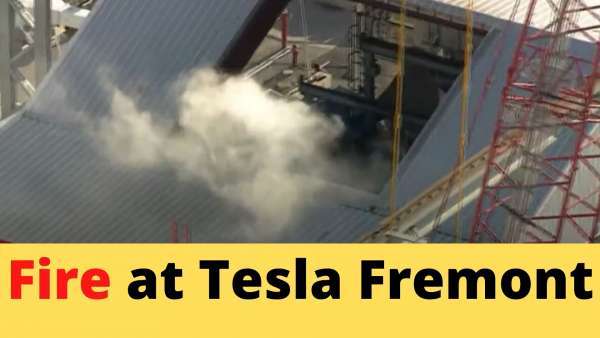 Fire at Tesla Fremont factory. Thank God no injuries. Fire is at the Giga presser area (stamping machine). It's contained. We don't know if production is affected. Previous safety incidents at Fremont.

Fire broke out at Tesla Fremont factory and the huge Giga Presser seems to be the location of the fire, which was brought under control without human injuries.

The fire took place in a part of the factory property that was under construction, according to Aisha Knowles, a spokeswoman at the Fremont Fire Department.

“The deep-seated fire was contained to a vehicle manufacturing stamping machine”, she added.

BREAKING: a fire has broken out at the Fremont factory. Fire engines arriving. Picture courtesy of u/Tergel
.@elonmusk pic.twitter.com/oGUJbKWigI

According to Reuters, "Two Fremont Fire engines and one truck remained at the scene to monitor the situation, according to the spokeswoman."

At this point we don't know if Tesla's car production at the Fremont factory was affected due to the fire and if yes, how much is it affected. We will find out as more information becomes available.

According to Tesla Fremont Factory's Wikipedia page On April 1, 2019, Tesla reached a settlement with the United States Environmental Protection Agency (EPA) over its mishandling of hazardous waste in 2017. Tesla allowed hazardous waste to accumulate on site without a permit beyond the allowed 90 days; the EPA found Tesla failed to "promptly clean up flammable paint and or solvent mixtures", left two 55-US-gallon (210 L) containers of hazardous waste open with "no gasket or locking mechanism", and violated air emission standards for three leaky transmission lines that the waste moved through.

In November 2013 there was an accident when the low-pressure aluminum casting press failed, spilling molten metal on three workers and causing their clothing to catch fire. Tesla was fined US$89,000 by the California Division of Occupational Safety and Health for seven safety violations, six considered serious.