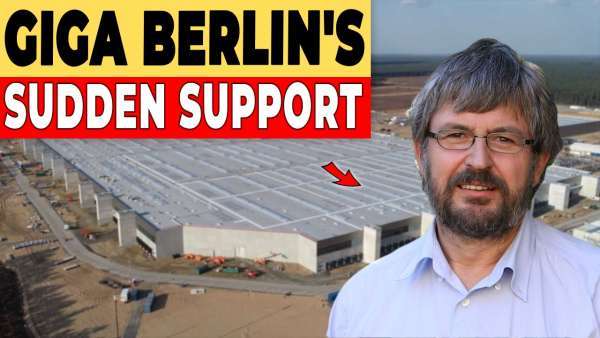 In recent weeks, numerous observers have asked themselves whether Brandenburg's Environment Minister Axel Vogel (Greens) is actually a supporter of the Tesla Giga Berlin settlement in Grünheide - or whether he only supports the project because of the coalition peace with the ruling SPD.

On Wednesday noon, Vogel made it clear at an event in the Chamber of Commerce that he was a real friend of the Tesla Giga Berlin gigafactory settlement. What is more, he openly admitted that the US automaker would receive preferential treatment from his authority. "We are convinced that it is right to give Tesla preferential treatment," said Vogel. It is correct that the State Environment Agency is concentrating on this project when processing pollution control procedures. The project has an "incredibly positive, Europe-wide charisma".

Tesla's activities in Brandenburg, the front yard of the German carmaker, would have increased the pressure on the local vehicle industry to switch. "We will now see that the switch to electromobility is much faster than we would have thought a few years ago," said Vogel.

Brandenburg benefits from this changeover, Porsche is planning a battery factory in Tübingen in cooperation with the chemical company BASF. The materials for cell production are said to come from the factory that is currently being built in Schwarzheide in southern Brandenburg for 500 million euros. "That is good news, not just for Brandenburg," said Vogel. Porsche's battery production is expected to have a capacity of 100 megawatt-hours per year.