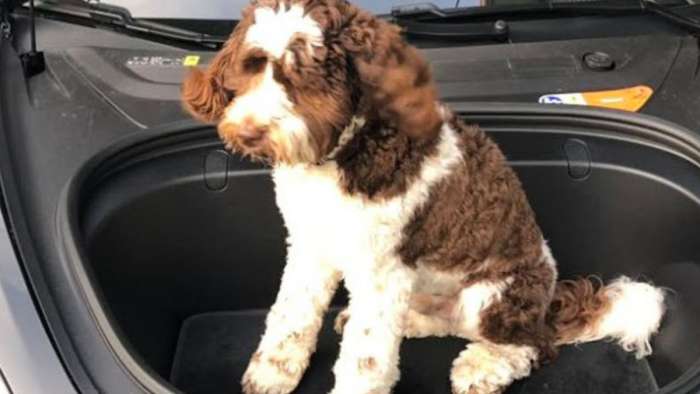 FrunkPuppy: A Tesla Owners' Movement That United A Community

If you own a Tesla, are a fan of Tesla, own stock in Tesla, have interacted with Elon Musk and Tesla on Twitter then you have probably come across the hashtag #FrunkPuppy, have seen cute pups in Tesla Frunks and had a quick chuckle.
Advertisement

You may have seen many of the funny memes by a Twitter account called Earl of Frunk Puppy.

:Hey @elonmusk can we get a #Tesla #dogmode update for safety?

:Elon to engineers: perfect #dogmode first before working on ANYTHING else #tesla @tesla pic.twitter.com/vzgbLyXLQi

What Is The Frunk Puppy Movement?

The whole movement started when a new Tesla Owner, Earl, tweeted a photo of his puppy, Norman, sitting in the front trunk--aka frunk--of his Model 3.

The Tesla owner behind this fun idea is Earl of Frunk Puppy. You may have seen a few of his memes on Twitter and chuckled.

He used the hashtag #FrunkPuppy and soon several other Tesla owners joined in on the fun.

Then boom! A movement began: #FrunkPuppyFriday, a fun photo contest among Tesla owners that even landed sponsors. Sponsors donate prizes for the winners who have the cutest photos and Frunk Puppy Board chooses the winners. The board chooses the final four and the Twitter community votes.

Many Tesla owners noticed things about their cars that needed enhancements--such as air fresheners (ScentWedge) or screen protectors (Elons Accessories) and often create products that other Tesla owners need to personalize their cars.

The Frunk Puppy movement has united Tesla owners who also have pets of all types into a family sort of sense.

The decision of Earl and his family to adopt Norman in 2017 has been quite a journey that eventually led to long lasting friendships between a community of people who love their electric cars and pets.

One of the most beautiful things about the Tesla community is their love for our world around us. Many care about Tesla’s mission which is to accelerate the world's transition to sustainable energy.

Many people buy Tesla just for this reason.

There has been numerous submissions for the movement, even one by Maye Musk, mother of Tesla’s CEO, Elon Musk.

How To Participate in FrunkPuppy Movement

Participating is fun and super easy. You can watch this video Earl and his family put together (It’s fun)!

You don’t have to have a pet to submit a photo--many people have submitted stuffed animals, beer and wine.

Earl and his family have made an impact on the community and now have a goal of bringing awareness for the need of clean energy sustainability while also promoting the importance of health and happiness for all species.

FrunkPuppy has partnered with TeslaBros to raise funds for the Humane Society of Silicon Valley and 100% of the proceeds go toward helping pets. Together, they are selling stickers to achieve this goal. You can learn more here.

You don’t have to be in Silicon Valley to help either. Many local animal shelters are always in need of volunteers, donations and often have adoption events.

Please comment below if you participate in Frunk Puppies movement and see you in the next story.