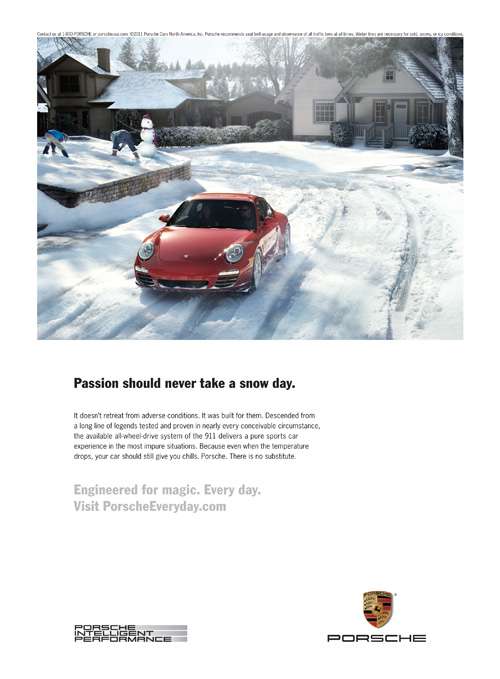 Porsche is rolling out an new advertising campaign that doesn't emphasize the sports car capabilities of its sports car models. Instead, the new Porsche ads will feature the everyday utility of the Porsche 911 and Porsche Cayman. Porsche is also soliciting home videos of people using their Porsches for daily run-of-the-mill activities. The theme of the campaign, appropriately, is "Engineered for Magic. Everyday."
Advertisement

David Pryor, Porsche Cars North America vice president of marketing, explaining the program said a Porsche doesn't have to be "only about a weekend joyride." Instead, print and television ads (beginning "in selected markets" during the NCAA basketball tournament games) will show Porsches in mundane, everyday activities. In a television spot, a yellow 911 picks up two (little) boys from school--they crawl in the back-- and a Porsche Cayman's front trunk swallows a couple bags of grass seed (perhaps or perhaps cement, Porsche isn't clear) from a big box home supplies store. The former, says Porsche, is a 911 as a school bus, the latter, a Cayman as a pickup truck.

In a print ad, a Porsche is even shown driving away in the snow. Take that, "always-garaged" used Porsche ads.

"It's the only car in the world that combines true sports car exhilaration and the drivability for daily use," said Pryor.
The difference between this and other Porsche ad campaigns, said Marshall Ross, chief creative officer for Porsche's ad agency Cramer-Krasselt, is that "we're not selling the dream car mystique of Porsche--that's already a given. The challenge here was to tell the truth of the drivability of the car and still make it feel as special as it really is."

Porsche is inviting owners to join in the fun. A website, PorscheEveryday.com, will combine professionally produced videos and pictures alongside that submitted by owners. To that effect, Porsche sent 200 Flip video camera to a selected group of Porsche owners, asking them to send in their homemade videos. Porsche has also invited "everyday videos" from owners, the Porsche Club of America, dealers and customers--plus a million-plus Facebook fans.

Ten talented amateur film-makers will be selected from those who submit films to Reelz.com demonstrating "daily magic" to "experience daily magic in a Porsche and then make a film about the experience." Of these, the best film will be chosen to be shown in movie theaters across the country and on the Reelz channel.

Television ads will appear on national cable with print appearing in April issues of newspapers and magazines including The Wall Street Journal, Wired, Fast Company and Conde Nast Traveler, seeking well-heeled customers for whom experiencing magic can be an everyday thing.