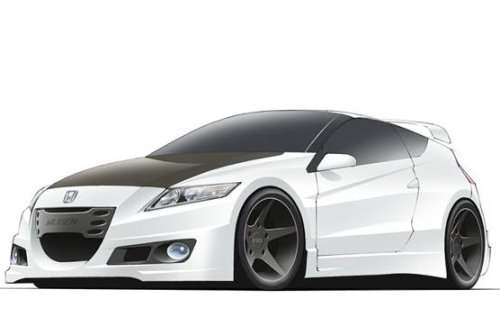 Honda won't be left out of the hot hybrid club, not if Mugen Euro has anything to say about it. The U.K-based branch of Honda's long-time tuning partner Mugen will produce a one-off prototype of a Honda CR-Z hybrid coupe with performance modifications to both its 1.5-liter gasoline engine and its IMA system electric motor with suspension and body enhancements to go with it.
Advertisement

"We wanted to extend the performance of the CR-Z," said Hiro Toyoda of Mugen Euro. The Honda CR-Z has been criticized by some as being underpowered and overweight, and lacking the handling finesse of its Honda CR-X predecessor.

Development is still in early stages, but Mugen Euro plans "major engine changes, and [modifications] made to exhaust and induction" to the CR-Z that will not only increase performance (though Mugen isn't citing any horsepower or torque numbers yet) but Mugen says that the changes "may even result in greater mpg and lower C02 emissions."

As a hint of power to come, however, came from Mugen Euro's reference to the 2009 Honda Civic Type R Mugen that put out 240 horsepower and saw limited production in the U.K. Toyoda said that for the CR-Z Mugen, the electric motor be "a vital ingredient to boost performance and economy."

Addressing the weight added by the hybrid's batteries and extra drive components of the standard Honda CR-Z, the Mugen-modified CR-Z will get lightweight components including a carbon fiber hood, and naturally Mugen wheels will also be used. New front and rear bumpers and other aero bits plus the obligatory spoiler are said to improve aerodynamics and make the Honda CR-Z Mugen look faster.

Expect good things when the Honda CR-Z Mugen debuts in July at the Goodwood Festival of Speed. Mugen's history dates back to 1973 when it was created in 1973 by Hirotoshi Honda, son of Soichiro Honda, founder of the eponymous car company. Mugen is known for its hot Hondas and for building and prepping engines for a number of Formula One teams from 1991 to 2000.
Toyoda praised the standard Honda CR-Z, calling it fun to drive, "but we thought that with more power and enhanced torque delivery it could be even more exciting. "

The Honda CR-Z is a joint project between Mugen Euro and Honda (UK). "This will be one quick hybrid," said Martin Moll, Honda (UK)'s head of marketing. "With more torque, more power and Mugen's experience of working with Honda cars, we're expecting great things. It promises to show how hybrid cars can be even more exciting to drive."

Even Honda enthusiasts in the U.K. shouldn't get too excited about the Honda CR-Z Mugen, however, as there are no production plans for the hot hatch. But then again, that's what they said about the Honda Civic Type R Mugen.