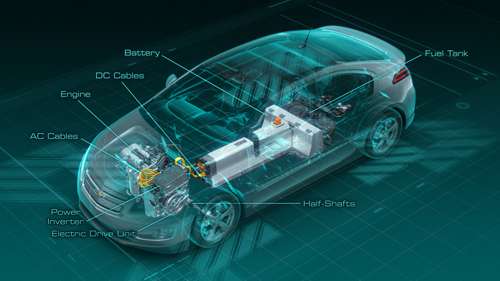 Makers of electric and hybrid cars would have told you so, but now the Insurance Institute for Highway Safety agree by awarding the Chevrolet Volt and Nissan Leaf the safety organization's top rating in crash tests.
Advertisement

The Volt and Leaf were rated "good", the IIHS's highest rating, in front, side, rear and rollover crash protection. Both vehicles also have standard stability control systems, qualifying the electrics for the IIHS "Top Safety Pick", which the insurance industry sponsored group awards for what it considers "state-of-the-art crash protection."

Manufacturers have been particularly defensive about the safety of electric cars and hybrid cars. Volvo, when discussing the Volvo C30 battery electric concept vehicle, noted that the car's batteries are well protected, replacing the fuel tank between the rear wheels and added to the tunnel between the seats.

Nissan says the batteries in the Leaf are positioned under the floor for vehicle packaging, but a rigid-mounted battery frame adds to an already rigid body, making it stronger yet. The Chevrolet Volt has its T-shaped battery pack securely between the front seats under the floor and crosswise under the rear seats.

The IIHS reports that of the other 78 models to qualify as Top Safety Picks, seven were hybrids. Those vehicles have both fuel tanks and battery packs, as does the Chevrolet Volt which can run in battery-electric mode for about 35 miles before an on-board gasoline engine kicks in to recharge the car's batteries.

"The way an electric or hybrid model earns top crash test ratings is the same way any other car does," said Joe Nolan, IIHS's chief administrative officer. "Its structure must manage crash damage so the occupant compartment stays intact and the safety belts and airbags keep people from hitting hard surfaces in and out of the vehicle."

The IIHS claims that the Nissan Leaf and Chevrolet Volt are safer because, as the batteries required for electric propulsion are heavy, the cars weigh more than other cars of a similar size. The IIHS makes a comparison of the Nissan Altima, a mid-size car weighing 3,200 pounds and the Chevrolet Impala, a full-size family car, at 3580, and the Leaf and Volt at 3,370 and 3,760 respectively, but both classified as "small cars."

The Leaf and Volt run counter to the trend to lighter vehicles, a trend that the IIHS says "could put people at greater risk of dying or being injured in crashes."

However Nolan said the extra weight makes the Leaf and Volt safer. "The Leaf and Volt's extra mass gives them a safety advantage over other small cars. These electric models are a win-win for fuel economy and safety."

It's an argument that would mean bolting several lead ingots to a car's floor would make it safer.

The IIHS crash testing only addresses crash safety, only injury from crash impact itself. The high voltage systems and batteries of electric and hybrid vehicles present additional challenges for first responders. General Motors offers special training on how to ensure post-crash safety for accident victims and first responders as well.

The Insurance Institute for Highway Safety's crash studies do prove, however, that in crashes, the Chevrolet Volt and Nissan Leaf, the first electric vehicles tested by the IIHS, exceed the crash safety standards of the safety organization.