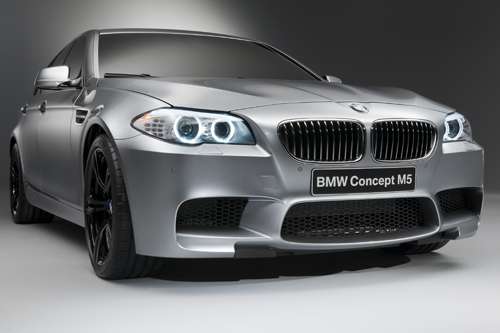 With the production version of the BMW M5 race-performance executive sedan all but settled for is fall arrival, one wonders how the BMW Concept M5 slated to be shown at the Shanghai Auto Show later this month will differ from the real deal. We suspect not much.
Advertisement

But a concept BMW needed, if only to wow the crowds and whet the appropriate appetites, so a BMW Concept M5 it is. The M5 concept, in photos released today, has aggressive cooling scoops in the lower apron, larger wheel flares, discreet aerodynamics and of course, more power.

One shouldn't expect much in the way of changes between the BMW Concept M5 and the eventual production model, so look for three large scoops under the front bumper, a large central scoop as wide as the double kidney grille flanked by a scoop on each side. The outer scoops have flaps on the outer ends--BMW says "racing-inspired"--to optimize airflow around the car.

The Concept M5 also has wider flares to cover the wider tires which still come out flush to the sides of the car and fill the wheel wells. Tire sizes are staggered, the rears wider than the front. Front tires are265/35ZR20 and rear 265/35ZR20.

There's a small spoiler on the trunklid--even concepts at BMW don't get big wings--but the rear apron is stylishly shaped though with an integrated diffuser snuggled between the dual exhaust outlets on either side.

Under the hood is a forced-induction engine for the first time. The BMW Concept M5 replaces the V-10 engine of the outgoing M5 with a new high-revving V8 with M TwinPower Technology. Like other similarly-equipped engines, the intake is located on the outside of the engine vee with the exhaust in the middle, pointed directly at the dual turbochargers. BMW isn't citing any numbers yet but expect power over 550 horsepower--BMW says only significantly increased over the V10--and with better fuel economy and reduced emissions by 25 percent.

Power gets to the rear wheels via the seven-speed M double-clutch transmission. This clutch pedal-free gearbox can operate in full automatic mode though with paddle shifting for maximum driver control. An auto stop/start system helps increase fuel mileage.

Suspension is modified to match the engine's upgraded performance. Traction and handling is also enhanced by BMW M's Active M Differential which divides torque between the rear wheels in cornering with a multiplate lock in the rear differential.

It's hard to see where modifications in the concept might be made, other than perhaps some minor body trim elements and the announcement of the actual engine output numbers