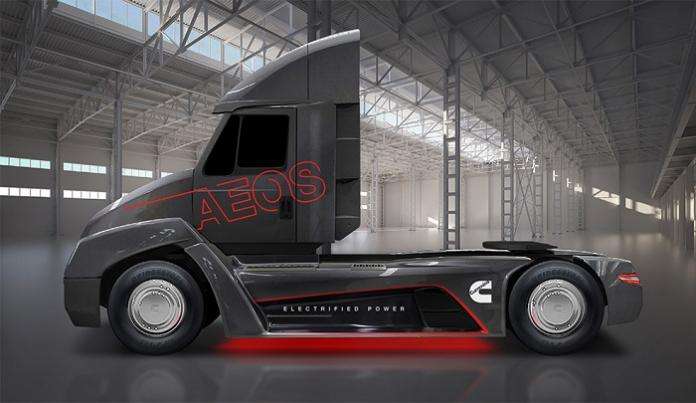 In 2006 Elon Musk wrote what he called the "Tesla Mater Plan." He’s nearly completed it and has since written part two. He envisions a world where every vehicle is electric and. Musk wants to cover all facets of vehicular transportation, but he just hit a bit of a bump in the road. A few weeks ahead of Tesla’s scheduled semi concept debut; Cummins unveiled its new electric powertrain.
Advertisement

Known as the AEOS, it’s a Class 7 Urban Hauler Tractor. Packing a 140-kilowatt-hour battery with an estimated range of 100 miles and a hauling capacity of 22 tons, it’s a pretty bold way to burst into the market. Current battery technology limitations mean a full electric powertrain for a Class 8 semi, commonly called an 18-wheeler, is not yet feasible because of the larger loads and much longer distances they travel, according to Cummins' Chief Executive Thomas Linebarger.

Cummins also claims that the range can be increased to around 300 miles with additional battery packs and the addition of a small, but efficient diesel generator in the form of the B4.5 or B6.7 engines which they currently produce. Hybrid technology which can be likened to that of the Prius, one of the most widely successful hybrid vehicles.

Impressively, Cummins went so far as to design the whole truck. It includes regenerative braking and a more aerodynamic design to reduce drag and increase overall efficiency, with plans also to explore adding solar cells for more passive charging capabilities. Cummins also claims the battery can be recharged in 1 hour a time they intend on reducing to 20 minutes by the year 2020. Almost comedically Cummins does not have plans to produce and sell the whole semi. Being primarily an engine manufacturer, they currently only have plans to supply the fully integrated battery electronics systems, to be fitted into other vehicles, starting as early as in 2019.

Cummins Squares Up with Tesla and Volvo

The timing of Cummins unveiling this new truck should not be overlooked given the serious competition in the emerging market including Tesla, Volvo, Proterra and Nikola Motor company. Cummins certainly seems to be looking to send a message that they’re here to fight for their share of the market. Cummins has historically been on top of innovation to keep the brand alive, and with a near 100-year history, they don’t plan on stopping now.

One huge potential benefit I foresee coming from a future of electric powertrains on delivery trucks and busses is the reduction of noise pollution in urban environments. Think about how loud the diesel UPS delivery truck coming through your neighborhood is each day, or the bus stop outside your office that is picking people up every hour. Now imagine virtually all that noise eliminated, that’s what commercial electric transportation could do.

I look forward to an electrified future. Let us not forget it will be a mere springboard into the world of alternatives like hydrogen fuel cell technology. As the push for alternatives to the current petroleum based technology grows stronger, so too does the research behind it.

What’s your take on this new generation of trucks? Is it really the future? What additional benefits do you see that we here at Torque News haven’t yet?

Elon Makes a Cybertruck Statement With an Action, But Quiet in Words
Tesla's Record Month in China: Doubled Registrations in March 2021
END_OF_DOCUMENT_TOKEN_TO_BE_REPLACED