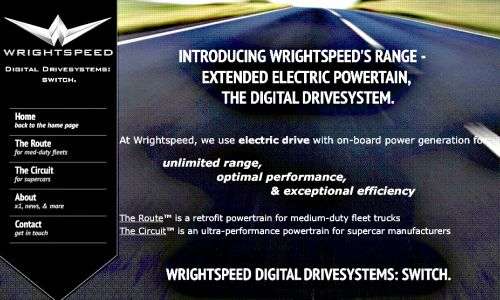 Wrightspeed has revealed its Geared Traction Drive (GTD), consisting of an integrated inverter, electric motor, and two-speed transmission. Just 12 months after first round funding, the company has accomplished what the leaders in the automotive industry have not.
Advertisement

The two-speed Wrightspeed GTD shifts via electronic means, using software-controlled motor synchronization rather than a mechanical clutch, providing a maximum output torque per wheel of an awesome 1,893 ft.-lbs. in first gear with 810 ft.-lbs. in second up to a maximum speed of 180 mph.

Officials at Fisker recently suggested that "Veyron levels of performance" could be achieved by the integration of a multi-speed gearbox and an electric motor. Wrightspeed's GTD makes this performance available by eliminating the current compromise in electric drivetrains between low-end torque and top-end speed.

Traditional transmissions use clutches, whether dry, multi-disc wet or a twin-clutch arrangements, and utilize mechanical synchronizers to coordinate speeds before engaging the gears. Such devices are heavy, more expensive and less efficient. With electric motors, you can control the motor speed precisely, changing it on the fly, so gears can be engaged without conflict. The synchronizing function once performed by mechanical means, is now controlled by software, precisely driving the electric motor.. Wrightspeed's software weighs nothing, costs less to manufacture, won't wear out and uses already present electronics to drive the motor.