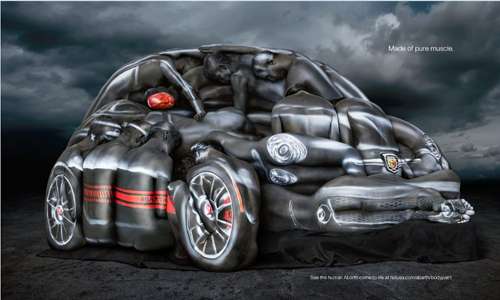 When Fiat talks Body Paint, it is what you're thinking [video]

Fiat has created an image of the 500 Abarth Cabrio from painted human bodies assembled to look just like the car – making it look muscular at a distance and bawdy up close.
Advertisement

The tag line to the ad is Made of Pure Muscle and it takes the 60s prank of stuffing 17 people into a small car to the ultimate level by squeezing a similar number of painted persons into a car composed of their own bodies.

What were they thinking? About selling Fiats we’ll wager.

It is actually a collaboration with a company called Body Paint who created the image for the ESPN The Magazine’s Body Issue. The image is really a form of performance art coupled with body painting combining the efforts of more than a dozen female artists, models and contortionists to recreate the shape of the Fiat 500 Abarth Cabrio.

Incidentally, at the RMDE event two weeks ago, the new Fiat 500 Abarth Cabrio provided a highly enjoyable driving experience on the winding and rolling highways along the Front Range south of Denver. It has a surprisingly satisfying exhaust note for a four-cylinder engine and a sport button that adds 10 to 15 horsepower for a thoroughly exhilarating ride.

“Body Paint allowed us to take part in a unique collaboration with a multinational sports company that connects the FIAT brand with sports and car enthusiasts across the globe,” said Olivier Francois, Chief Marketing Officer, Chrysler Group LLC, and Fiat Group Automobiles Head of Fiat Brand.

The edition of ESPN The Magazine featuring the remarkable print image is on new shelves today.

“Our ideal execution is when a client creates an ad that works so well within the context of our environment,” said Eric Johnson, ESPN executive vice president, multimedia sales. “Not only is this a creative win, it thematically ties in perfectly with ESPN The Magazine’s annual Body Issue.”

Year ago, during in our days of print journalism, we profiled a body painter named Mark Reid who could do amazing things using the female form as his canvas. Most men would just get lost in the finger painting and lose sight of the artistic goal, but not a professional such as he.

"We wanted to create a concept for ESPN The Magazine's Body Issue that was as visually unique as the Fiat 500 Abarth Cabrio," said Jason Stoicevich, Head of FIAT Brand North America. "The notion of the 'Body Paint' print ad conveying athletic grace in a magazine that specifically devotes itself to covering athletes around the world sparked a perfect union for the FIAT Brand."
Don’t take their word for it – see how it was done in the video below.