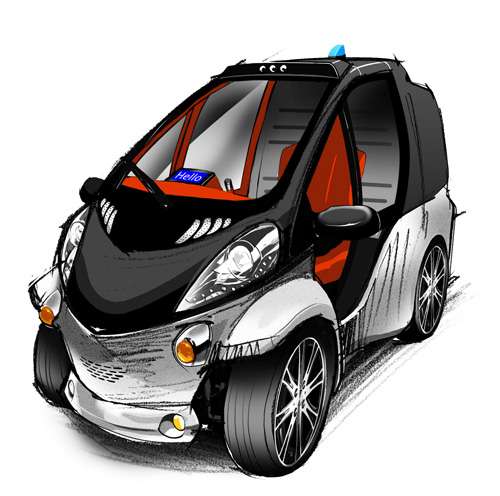 During his speech to members of the Motor Press Guild today, Jim Lentz, Toyota Motor Sales President and CEO, talked about connected cars, future concepts and projects, including how Toyota is using skateboards to build an even more connected commuter car.
Advertisement

Most manufacturers have their own telematics systems such as Ford’s SYNC. GM’s OnStar, Toyota’s Entune and Lexus Enform. To cope with the trend of more and more apps from phones and tablets, plus minimizing, if not eliminating, driver distraction is something all brands are working to achieve.

“One of our many approaches is using a skateboard,” Lentz said. “I’m not saying people should travel by skateboard, but rather we can learn from one.”

He explained a vision of the future in which the dashboard is devoid of buttons, and has no touchscreen allowing a driver to remain focused on the road. That’s the kind of vehicle/driver interface Toyota is working to create.

“The Board of Awesomeness (that’s what it’s called) is an electric skateboard run by hand gestures,” he stated. “As a benefit of our partnership with Microsoft, the board is equipped with a Windows 8 tablet and Windows Kinect motion-sensing software.

“By raising and lowering your hand,” he motioned, “you control the throttle and the closer your hand gets to the board, the faster the motor goes.”

How this would work in a car, perhaps with mode selection via voice command, you would raise your hand to increase audio volume or drop your hand to lower it. Unlike voice recognition, hand gestures are not hindered by accents or mispronunciations.

“Hand gestures are pretty universal,” Lentz remarked, inviting the audience to supply their own punch line.

So on Toyota’s march into the future, a skateboard is leading the way.

Part of that future vision is the Smart INSECT one-occupant vehicle concept that made its debut in Japan last September.

“The INSECT is our next-generation communications-linked concept model that supports the driver and keeps them connected to his or her home,” he said. “It’s an ultra-compact, single-passenger electric vehicle that’s equipped with a bevy of technologies like motion sensors, voice recognition and behavior predictions.”

The CEO characterized the concept as a high-tech update of Herbie, the Love Bug.

Motion sensors and facial-recognition technology detect and authenticate the owners approach, flashing its front lights in recognition. With a wave of his hand the driver opens the doors.

Upon entry, the owner is welcomed back with ‘Hello’ or any custom phrase. Using voice recognition, the INSECT will talk to the driver to establish a destination and set various functions such as audio mode and levels.

The future bug led to a brief discussion of autonomous cars. Lentz pointed out how this technology has been coming for a long time in systems like anti-lock brakes and vehicle stability control, plus features added to new models annually. Tech that enables pre-collision systems, lane keepers, blind spot alerts and even automatic parking.

“The new 2013 Lexus LS offers the industry’s most advanced pre-collision active safety system,” he said. “It’s designed to assist the driver in avoiding or mitigating collisions with vehicles and pedestrians under a wide range of city and highway speeds, day or night.”

Nevertheless, Toyota’s view of coming autonomous technology may differ from other brands.

“We believe the driver must ALWAYS be engaged and this technology must be introduced slowly due to major legal, regulatory and consumer hurdles that need to be made.”

The most incredible, sci-fi system they are working on?

“At Toyota, one idea we’re exploring is like Harry Potter’s invisibility cloak,” he smiled.

Rear view cameras are becoming fairly common on cars today, but they’re not foolproof. Toyota is working on a way to be absolutely sure you are not going to hit anyone or anything.

At Keio University in Japan, researchers have developed optical-camouflage technology that makes the back seat – the entire back of the car disappear, totally eliminating blind spots.

This system was showcased at Tokyo’s Digital Content Expo in a See-Through-Prius last September.

“How it works seems like magic, but the cloak is made of reflective materials that capture footage from cameras behind the car which then projects the image onto the cloak visible to the driver,” Lentz announced with pleasure. “The illusion of invisibility is amazing. One of the developers said, ‘It will feel like you’re driving a glass car.”

This can only lead to one question. Should people who drive glass cars throw stones? We seriously doubt it.