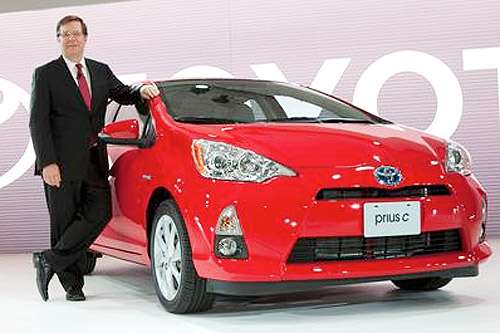 With an analogy of how the V-shape Canadian geese utilize in migrations increases the lift of those behind the leader, Jim Lentz, president and CEO for Toyota Motor Sales, USA, Inc, implored the 2012 Car Automotive Research Management Briefing Seminar to adopt cooperative teamwork to build a better auto industry.
Advertisement

“So, by flying together in a ‘V’ formation, their range is 71 percent greater than a bird flying alone,” he intoned. “In other words, their Teamwork helps them travel on the energy of each other and propels them to their destination more quickly.”

It is an appropriate illustration in that a migrating gaggle of geese emits much the same cacophony of sound as a tangle of vehicles going nowhere in urban gridlock.

His point is that the more suppliers, dealers, associates, lawmakers, researchers, engineers, automakers and even consumers work in concert to achieve (or even arrive at) shared goals, the quicker we will arrive at an empowering future.

“Let’s face it, the days of one company doing it all are gone forever,” he said. “The challenges we face are far too great to go it alone. Companies are increasingly joining together to build better cars, develop better in-car connectivity and reach for sustainable mobility – and this collaboration, this teamwork, comes at a great time because this industry is headed in the right direction – and it’s an ideal time to get our act together.”

Examples of the cooperation Lentz is referring to are not hard to find. Tesla has worked with Toyota to create the RAV4-EV in record time. Then there’s the alliance between Renault and Nissan expanding the reach and production capability of both in a corporate symbiosis. You've probably heard about the agreement between Toyota and BMW to share technology and expertise. Toyota wants insight on engineering and building thrilling performance vehicles while BMW can leverage the other company's leadership in hybrids, batteries and manufacturing processes.

This is just the sort of cooperation and sharing of expertise Lentz is encouraging. He would also like to see some sort of bridge to teamwork and understanding between the automotive industry and the agencies regulating it, but first touched on the economy and the current business outlook.

Though the signals are currently mixed and a little clouded by the upcoming elections, as well as economic hiccups in Europe and Asia, there are signs of life. Lentz pointed out the rate of population growth, the age of vehicles on the road, the value used cars are retaining and the growing availability of auto loan credit as positive portents for the next few years.

The only impediments he sees are getting Gen Y excited about cars and complying with tough governmental regulations.

“In just four years, every automaker’s fleet must have a combined average fuel economy of at least 35-and-a-half miles per gallon,“ Lentz said. “By 2025, it increases to 54-and-a-half.

“We’re already seeing brands, like Ford and BMW, replacing V6 engines with 4-cylinder turbo charged power trains that are more fuel efficient and still have strong performance – but let’s not kid ourselves. It’s going to be a huge challenge for all brands to reach these regulations without making big investments in new technologies.

Toyota used to do everything on their own, but those days are over, he continued, pointing out their recent collaboration with other companies on engine development, manufacturing processes and in-car technology and safety.

“For instance, we’ve teamed with Ford to work on hybrids for trucks and SUVs so we can do a better job of meeting new industry regulations. We’re also working with BMW on diesels, hybrids, electric drive, fuel cells, lightweight materials and other environmentally advanced technologies.”

He mentioned the 100-mile range RAV4-EV with pride and said, despite their progress and achievements, they have no intention of resting on their laurels.

“We realize there’s no guarantee that one particular technology is the answer for all consumers, so we’re taking a broad portfolio approach to the future and letting customers decide what works best for them.”

The Toyota CEO went into greater detail on improving auto safety and what needs to be done to build cars Gen Y will buy, before returning to the original theme and closing out the address.