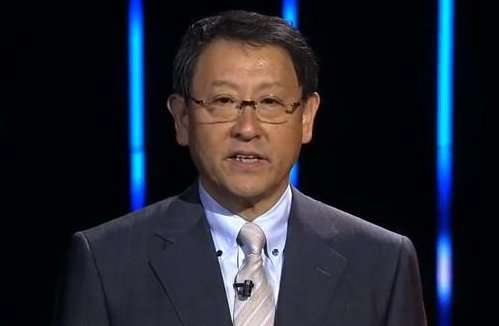 Akio Toyoda, president and CEO of Toyota motors, took the helm right when the $115 billion company posted its first loss in decades. As the first of the Toyoda family to take charge since 1995, he vowed from day one to take his grandfather’s auto manufacturing firm "back to the basics" and return to building cars to make people happy.
Advertisement

A short six months later, the CEO had to face the worst quality crisis in decades. The firestorm of criticism Toyota suffered over their slow response to the accusation of faulty accelerators in the United States threatened Toyota's reputation and success in their most profitable market.

The safety crisis forced Toyoda to testify before Congress in February last year and now as the globe’s biggest automaker recovers from that crisis, things still don’t look bright – even though new evidence lays the blame on human error rather than faulty electronics as the cause of most of the so-called cases of unintended acceleration.

Once the benchmark for rivals such as Volkswagen AG or Nissan Motor Co, Toyota used to be world's most envied automaker. Hyundai Motor Co tends to take that honor these days whose popular and fast-selling cars are taking some of the sheen off the Toyota nameplate.

"Toyota can't get by with its quality reputation alone anymore," said Kurt Sanger, a Tokyo-based auto analyst at Deutsche Securities in an interview with Chang-Ran Kim reported by Reuter’s. "Fairly or unfairly, that's been tarnished by the recalls. But even before that, the other guys were getting better while introducing more interesting products. For Toyota to just continue to do what it was doing was not an option. It ignored that for awhile."

Toyoda has had to face the imbalance of the Yen hovering near record highs, driving up its U.S. prices. The earthquake and tsunami in Japan this year as well as Thailand's devastating floods helped to further interrupt supply chains and hurt the business.

Nevertheless, Akio Toyoda is nothing if not a bona fide “car guy,” who has a very different approach to overseeing the business and relating to the media. It is his intention to reinvent the company in his own image if it takes 10 full years.

Grand entrances are a trademark of the 55-year-old executive’s style. For example, he likes driving a car into media events, whether it's the all-new Camry at Toyota's Kentucky factory or an old Kijang truck in Jakarta. Even at stuffy corporate functions, he likes to bring in a Lexus LFA, starting the engine and filling the banquet rooms with the sound and smell of the supercar's V10 engine.

"By the next day, no one will remember the speech I made," Toyoda said before his October 15 race at Nuerburgring. "But they'll never forget that sound and smell."

Earlier this year, new hires in Japan were called to the company's racetrack to celebrate. As they waited for an introduced to Toyota's race drivers, Toyoda circled the track in an LFA just for effect.

"Nobody knew it was me. After the introductions, I pulled up to make my remarks," he said proudly. "In those remarks, I asked them if they liked cars and that if they didn't, they shouldn't bother joining."

His efforts to inspire the manufacturer’s 300,000 employees to create more exciting cars was enhanced, when he appeared on CNN's Larry King Live following the Congressional grilling last year.

Toyoda believes he brought an end to that sad saga when King posed his final question: What car do you drive?

"I thought to myself, should I say Prius? Would that sound good?" he recalled. "But I decided to just let go and I felt a smile return to my face. I told him, 'I drive about 200 a year. I love cars."

In that moment, Toyoda realized he had to focus on the product to find redemption and avoid an early resignation. Consequently he reiterated his vow to lead Toyota to the next level with cars as the leading protagonist. The day of the U.S. congressional hearings, February 24, 2010, was designated as the launch date of a corporate renaissance.

Akio Toyoda displays the determination, the savvy and the charm to do just that – if the stockholders will let him. He wants 10 years to accomplish all his current goals, but it takes profit to turn a company around and maintain corporate control.

Hyundai has copied elements of Toyota’s business model, pairing that with free trade agreements and other assets like the relatively low exchange rate for Korean currency.

"The Koreans are really coming at them," Tetsuya Kato, publisher of Japan's Car Graphic magazine is quoted as stating in the Reuter’s article. "If Japan keeps going at this snail's pace (with free trade deals), there's a real possibility that Japanese automakers will lose."

Toyoda can see the writing on the wall as far as Hyundai being the current front-runner and isn't worried about not being the world's top-selling automaker this year, an honor that may go to Volkswagen this year.

"I think Hyundai is making great cars, and in some ways I think we're trailing them," he said in the interview.

"We have so much more room to improve. But as long as you know that - it's like Steve Jobs said at the end of that speech: 'Stay hungry. Stay foolish.' Those words really spoke to me," he said, referencing the commencement address delivered at Stanford University in 2005.

"In the short term, you win some and lose some. But we're working hard to build Toyota into a company that attracts investors who would look back 15 years and be glad they owned our shares. It's the difference between thinking of 10 years as the span of 10 years, versus 10 years as a part of 100 years."

Nevertheless, a lot will depend upon the investors – Toyota’s shares are down 20 percent while Hyundai's have grown 25 percent so far this year.