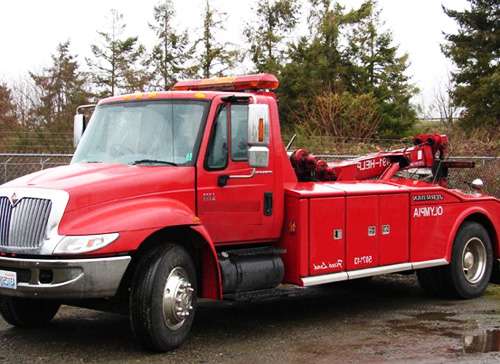 The tow sharks are circling so watch your ride

Police in Orlando are investigating a towing scam in which unsuspecting attendees to a music festival were directed into a private lot at the behest of ersatz owners, only to find their cars towed when they returned hours later.
Advertisement

Victims were waved into the lot by two men who said they worked at a nearby auto dealer and rented the space out for parking on a sporadic basis. Police investigating the incident discovered the two men, still at large, were not employees of the showroom, but were apparently in league with up to seven different unscrupulous towing agencies.

This event was nearby the Central Florida Fairgrounds where the Vans Warped Tour just happened to be staged that day. Those who cars were towed were charged $100 to get them back.

For the record, the unidentified tow truck above was not part of this or any other such incident.

A similar scam was perpetrated in Denver some eight months ago at a downtown music venue very near the Forney Museum of Transportation. A lot near the venue was left open and people mistakenly parking there were later towed.

In this case it really was private, once again someone there was telling people they could park in the lot and even charged them $10 to do so.

The owner of the facility came out after working late, to find all these unauthorized cars on their private lot and ordered them towed with full legal rights on his side. The people who took money and told people to park there were the criminals, but those who listened to them ended up paying the piper.

The event in Florida was discovered by WFTV in Orlando, who found up to seven tow trucks from different companies in the parking lot hurriedly hitching up cars before quickly towing them away.

"It was literally like sharks feeding. I mean, like never seen anything like it in my life. I thought they were actually going to get into it over who was going to tow which vehicle," witness John Rice told the station.

Once the tow truck drivers noticed the cameras trained on them, they scurried away in haste.

"Some of them weren't even on all the way and they were just taking off," Rice added.

Orlando Police are investigating the incident during which nearly 150 cars were first charged for illegal parking and then towed.

"Obviously they're making a quick buck, but it's like you didn't let anyone know in doing it and that's just like not right,” car owner Greg Hughes stated.

Sorry Greg, no one is going to warn you when they are about to rip you off.

Bill Passio, a man who worked next door, watched the whole thing transpire. "They were waving them in, 'come in, come in, come in' and they had pamphlets too to put in the car like it was legit," he said. "A half hour, no cars. Empty. They were coming in like that, fighting like tow truck wars.”

Worst of all, like the scam in Colorado, they were charging people $10 apiece for the dubious privilege of having their vehicle towed.

"It was literally like sharks feeding. I mean, like never seen anything like it in my life. I thought they were actually going to get into it over who was going to tow which vehicle," John Rice added.

It comes down to what they always say in the spy movies – you can’t trust anyone – or take anything for granted in this modern world.

So to cover your backside, before you attend any event in an unfamiliar part of town, research legal parking areas before hand and make sure you are parking in an official lot for the event – it could save you a big headache and a bill of $300 or more.

Be suspicious of special events as everyone is excited to be attending and can’t wait to find a parking space and get inside for the festivities, whatever they may be. This creates an opportunity for those who feel they have the right to separate a fool from his or her money.

Trusting the wrong person doesn’t make you a bad person, but taking money from others via deceit and trickery is a despicable crime in a free society. Ultimately, these people are stealing our freedom, as Aldous Huxley so wisely implied, society will always choose security over freedom if it comes down to such a choice.

Don’t let this happen to you or us all.