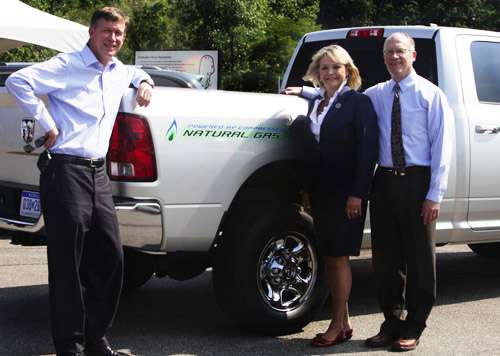 During April, Governors Hickenlooper and Fallin, along with the governors of 11 other states, delivered a letter to US automakers sharing the intent to purchase more CNG vehicles for their home fleets. This could create cost-savings for the states while motivating the manufacture of affordable and functional CNG vehicles.

The letter referred to a multi-state Request for Information of background and information from manufacturers in anticipation of a multi-state request later this summer. The states involved in the action include Colorado, Kentucky, Louisiana, Maine, Mississippi, New Mexico, Ohio, Oklahoma, Pennsylvania, Texas, Utah, West Virginia and Wyoming.

A primary part of the initiative's goal is to establish a demand for the design and sales of a suitable CNG-powered passenger vehicle to be used both by public fleets and private sector consumers.

"By meeting in person with automakers in Detroit, we can discuss in-depth the level of interest from the 13 states that have signed on to this initiative and jump start the process," Fallin said. "The development of CNG vehicles continues to be hampered by a 'chicken and egg' scenario. Consumers won't buy CNG vehicles while there is limited fueling infrastructure and high vehicle price points, and manufacturers won't wade into the market if there is not sufficient consumer demand. Purchasing vehicles for state automobile fleets will help encourage the development of fueling infrastructure and break through the barriers holding back the development of CNG vehicles. The end result will be an initiative that will pave the path toward the development of a product that has the ability to save money on transportation costs for both state government and families."

In the photo above, (from L-R) Colorado Gov. John Hickenlooper, Oklahoma Gov. Mary Fallin and Oklahoma Secretary of Energy Michael Ming pose with a Dodge Ram 2500 that runs on compressed natural gas during trip to Detroit to promote the governors' bipartisan, multistate CNG vehicle initiative.

"Natural gas vehicles provide clean, affordable transportation that can increase our nation's energy security and bolster economic development," Hickenlooper added. "We believe there is strong interest in natural gas vehicles and we want to leverage the collective purchasing power of state fleets to jumpstart that market. These meetings will help establish a mutually beneficial partnership between the 13 states on the agreement and the auto companies."

Gov. Fallin went on to say the development of CNG vehicles and natural gas as a transportation fuel has wider economic implications for Oklahoma and the nation.

"The United States has ample supplies of natural gas resources that are currently supporting millions of jobs throughout the country," he stated. "By promoting CNG use, states like Oklahoma are supporting the production of American-made energy that creates jobs and reduces our dependence on foreign sources of oil. States are leading the way to American energy independence as Washington struggles to find a coherent energy policy."

LG's New EV Battery Plant Is a Welcome News for Tesla
Tesla Giga Berlin's New Hurdle: It's Not Only the Gov't, but Now Tesla Itself
END_OF_DOCUMENT_TOKEN_TO_BE_REPLACED